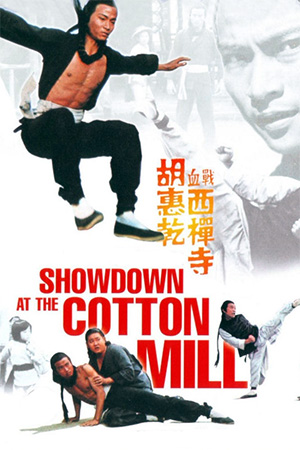 Chi Kuan-Chun began his career with the Chang Kong Film Company, a subsidiary of the Shaw Brothers studio owned by Chang Cheh. Chang Cheh helmed the directors chair for all these films and following his desire to make films in Taiwan, most of them were filmed partially or completely in Taiwan. When Chi’s contract with Shaw Brothers expired he made the decision to remain in Taiwan as he felt he could make more money there despite keen interest from Golden Harvest to sign him. Chang Cheh also kept ties in Taiwan and was a key figure in forming the independent  Chang Ho Film Company. The first film to be released by the newly founded company would be ‘Showdown at the Cotton Mill’ starring Chi Kuan-Chun, directed by Chang Cheh understudy Wu Ma.

Hu (Chi Kuan-Chun) has returned from the Shaolin Temple to take revenge for his brothers death. He kills the two men responsible. His victims however, are influential members of the Wu Tang clan who effectively own the local town. Infuriated by Hu’s actions they report the matter to the authorities making him a wanted man. Hu then goes into hiding, and in an attempt to flush him out, the clan kidnap his wife and child. Hu almost effortlessly rescues them however, but the Wu Tang clan won’t give up so easily.

‘Showdown at the Cotton Mill’ begins where most Kung Fu revenge films end, at the moment when  the protagonist exacts his revenge. The film then follows the events after his moment of revenge as his victims comrades are intent on  taking their own revenge in turn. This is quite an unconventional move which could have proved very interesting but ultimately becomes the films undoing. The film now has to spend the best part of 90 minutes exploring the aftermath, something that the film fails to achieve without suffering. While it starts off quite promising, as it approaches the half way mark boredom becomes a major factor as it completely runs out of steam. After the Wu Tang clans first attempt to erase our protagonist from existence subsequent attempts only become monotonous. At this point the only variable that prevents interest from waning completely are the brief intervals where Tan Tao Liang threatens to make an impact on the film. An event which doesn’t occur until the last half hour. However when Tan Tao Liang is finally unleashed it’s certainly the highlight of the film. However the spectacle we are presented with is not his best work. The choreography is competent but not exceptional, and therefore can not  successfully compensate for the films shortcomings.

‘Showdown at the Cotton Mill’ could have been a competent independent film. Had the plot elements that take place before the actual film begins been included and substituted for the arid midsection it almost certainly would have fulfilled it’s potential. It is obvious however that it would never be among the cream of Kung Fu classics. It’s certainly worth watching once, but as the action is good but not great it is unlikely to require repeat viewings due to it’s shortcomings in other areas.