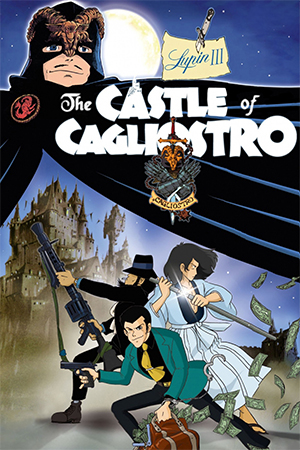 After pulling off an extremely successful heist in Monte Carlo, super-thief Lupin is furious to discover that his stolen booty is in fact counterfeit.  In a bid to retain an ounce of his pride (and perhaps gain a little retribution), he decides to track down the source of the fake bills and his search soon leads him to an evil Count who lives in the country of Cagliostro.  Enlisting the help of his partners (a retired gangster, a modern-day samurai and a female thief), Lupin travels to Cagliostro where he uncovers an even greater treasure in the form of a beautiful princess who is in desperate need of rescuing.  Now it’s up to Lupin to muster together all of his cunning to siege the castle of Cagliostro and take care of the dastardly Count once and for all.

Seeing Hayao Miyazaki’s name plastered all over the credits of ‘The Castle Of Cagliostro’ is probably very misleading for the majority of fans who know him best for the likes of ‘Spirited Away’ or ‘My Neighbour Totoro’.  Unlike those films, you won’t find any bizarre fluffy creatures bouncing around fantasy worlds here but don’t let this put you off as Miyazaki is a true master of his art and always seems to be capable of crafting out an enjoyable film, no matter what the subject.  Thankfully that rings true for ‘The Castle Of Cagliostro’, which was actually Miyazaki’s directorial feature-film debut and was most likely a result of his successful handling of a couple of episodes of the ‘Lupin III’ anime series.  Basically, what it breaks down as is one heck of an entertaining adventure film that has an affinity to the Hollywood crime capers of the 1970s (the ‘Pink Panther’ springs instantly to mind) and manages to blend action, humour and a sweet storyline with ease. It’s also pleasing to see that Miyazaki squeezes in a couple of the outskirt characters from the series that are all exceptionally well represented and had me itching to get my hands on more of the ‘Lupin III’ movies and episodes.

For the animation used within ‘The Castle Of Cagliostro’, it is mostly in keeping with the original series and has a somewhat old-school look.  It’s very much along the lines of the likes of ‘Doraemon’ which isn’t really surprising considering they were both made around the same era.  Don’t get me wrong though, this is by no means a bad thing as the ‘Doraemon’ artwork still remains a personal favourite of mine and one has to say that these early hand drawn animated efforts are often more pleasing on the eye than the recent spate of computer animated movies.  There’s something about the roughly drawn edges and over the top facial expressions that brings out an element of nostalgia in me and makes this far easier to warm to than the likes of ‘Shrek’ or ‘Shark’s Tale’.

Although it can often be overlooked by Ghibli enthusiasts simply because of the ‘Lupin’ label, ‘The Castle Of Cagliostro’ is a film that should really be seen by all Miyazaki or anime fans in general. It’s just such a wildly entertaining ride that contains all of the right elements that go into making a solid adventure film, so much so that you can’t fail to lap it up and be left begging for more.  Miyazaki really knows what the audience wants to see and I am once again left applauding a filmmaker who continues to come up trumps with whatever project he works on.