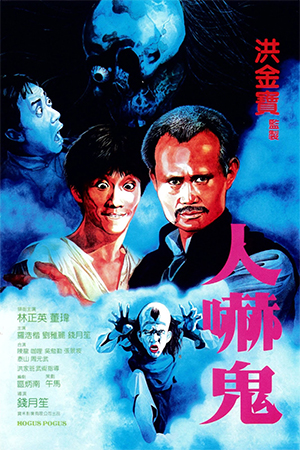 Before he became the huge (but stereotyped) star of the ‘Mr. Vampire’ films and its spin-offs, Lam Ching Ying had previously performed in a number of key comedy-horrors such as ‘Encounter Of The Spooky Kind’ and ‘Dead And The Deadly’. This film follows in a similar vein, but does not equal those earlier efforts.

Stephen Tung Wai, who has become more of a choreographer than an actor these days, plays Kuei, a minor player in a roving opera troupe but spends more time playing practical jokes than concentrating on his performances. As is so often the case, the group of happy-go-lucky friends led by Wai frequently try and scare each other with ghost stories that when a real ghost turns up no one takes it seriously. Unfortunately, they have disturbed a particularly nasty one and this inevitably leads to a showdown of good versus evil.

Much of the running time is spent showing the practical jokes the troupes peripheral actors play on each other and the lead actor ‘Chin’ whom no one likes. Lam Ching Ying plays the wise, older figure in his sleep and does not feature as prominently as I would have liked. Martial artistry is played down in favour of the supernatural element, but one scene in particular between Kuei and Chin is well choreographed and breaks up the monotonous pace of the films lame comedy. Even similar films like the aforementioned ‘Dead And The Deadly’ had a greater action content. The finale depends more on pyrotechnics and wirework than kung fu so was a bit of a let down.

All in all, this is one for die-hard fans of Lam Ching Ying or the Chinese comedy horror genre in general. There is not much for martial arts fans, and even the usually entertaining comedy appears somewhat lacking. Worth a look, but probably not a keeper.