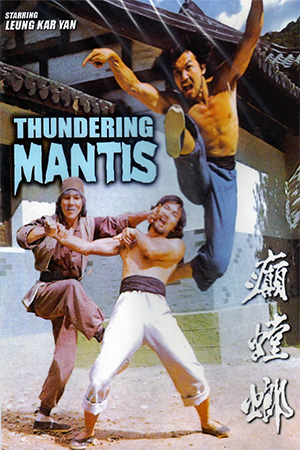 Leung Kar Yan plays a kung-fu obsessed nobody whose various antics land him in trouble with local gyms. After getting a sound thrashing from local heavy Hsia (veteran bad guy Eddie Ko), Leung befriends an acrobatic kid who then introduces him to this grumpy uncle. The uncle refuses to teach a stranger his Mantis Fist and therefore Leung is forced to learn in secret. After another beating at the hands of Hsia, Leung is finally accepted as a student albeit through trickery. The new student relishes this punishing training and continues to form a bond with his new master. However, Hsia is eager to finish what he started and kills nearly everyone Leung knows and values – including his eccentric master. With just the kid and himself left, Leung is forced to see his friend’s demise at Hsia’s hands; however, the sheer trauma acts as the catalyst for Leung to take revenge as he is finally pushed over the edge.

The success of ‘Sleeping Fist’ meant the re-teaming of popular kung fu star Leung Kar Yan and acrobatic youngster Wong Yat Lung for a film that stays pretty much within the boundries of the kung fu genre. The film follows the well-known storyline of ‘fighter finds master: master teaches hidden secrets to new student: villain kills master: fighter exacts revenge’ and within these conventions is an enjoyable yet unremarkable kung-fu film. However, the last ten minutes flips this onto its head as the audience literally see Leung Kar Yan go insane and decimate the villain’s hordes. Cackling, crying and shrieking, the hero suddenly goes beyond the usual confines of revenge and enters complete madness; the effect of this on the film is jaw-dropping to watch. ‘The Thundering Mantis’ is a three star film that earns a fourth for its remarkable ending and Leung Kar Yan’s virtuoso performance as the hero driven straight over the edge.