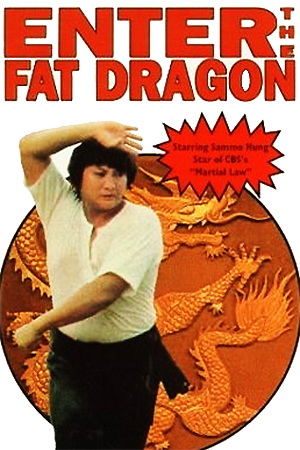 The portly kicker stars in a film that’s both a vehicle for his self-deprecating humour and a loving parody of the late Bruce Lee. Unlike the scores of Bruce Lee impersonators that flooded 70’s eastern cinema, Sammo is of course playing it strictly for laughs.

In an obvious homage to Lee’s ‘Way of the Dragon’, Sammo plays a country bumpkin named Ah Lung who travels to the big city to help out at his uncle’s back-alley restaurant. Ah Lung is a devoted Bruce Lee fan who hopes to follow in his idol’s footsteps. However, unfortunately for him, most people are either comparing him to a pig or a brainless buffoon. The chance to prove himself comes when thugs cause trouble in his uncle’s restaurant. In true Bruce Lee style, Sammo sends them packing, utilising double nunchukas to incredible effect. It’s not long, though, before the thugs take revenge and while Ah Lung is away, they destroy his uncle’s restaurant. Ah Lung therefore gets a job as a waiter, but as before, becomes embroiled in a plot to kidnap one of the women he works with. In a finale which attempts to parody Enter The Dragon, Ah Lung saves the day.

As the plot suggests, this is a very episodic film. There is no single narrative, rather it follows the misadventures of Ah Lung and his friends. Nonetheless, Sammo is yet again entertaining and combines his innocence with his exceptional fighting skills with effortless ease. In stark contrast to the po-faced films that came in the wake of Bruce Lee’s death, ‘Enter the Fat Dragon’ is a warm homage to the man who popularised martial arts cinema around the world. In a telling critique of the movie scene at the time, Sammo has a memorable fight against a second-rate Bruce Lee impersonator on the set of yet another of the risible films that were sadly produced. Sammo has never needed to impersonate anyway, such is his unique place in cinematic history, but he still outshines every Bruce Lee impersonation that went before him.