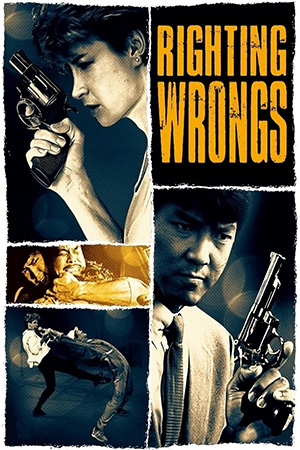 As mentioned in my review for ‘Armour of God’, Cynthia Rothrock turned down a part opposite Jackie Chan to play a larger role in this Yuen Biao action thriller. Biao plays a lawyer who takes the law into his own hands when the bad guys shoot a good friend of his outside the courthouse (hence the UK title ‘Above The Law’). Rothrock plays an almost identical role to that of the earlier genre classic ‘Yes, Madam’. Corey Yuen Kwai takes the action a step further than that in ‘Yes, Madam’, making Biao and Rothrock look better then ever in a number of impressive action sequences.

Biao’s acrobatic talents are showcased magnificently as he flips, kicks, abseils and uses all available weapons (vases, axes and dead bodies!) in an attempt to punish the crimes of others.

This is the definitive Hong Kong action flick of the 80’s, easily on a par with ‘Police Story’ and should take pride of place in any fan’s collection. Also, if possible, get the Universe DVD as this contains both versions of the film and the original language.