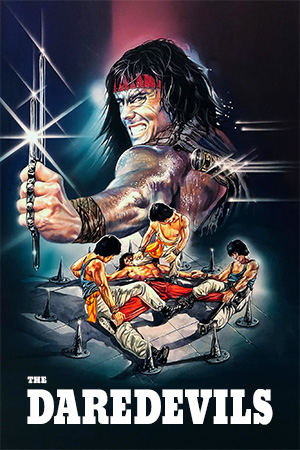 The many Shaw Brothers films fans around the world seem to reserve a particularly intense anticipation for the official releases of Venoms movies by Celestial. Many have only seen the light of day recently via bootlegs and old VHS tapes so the opportunity for them to presented in crisp, remastered versions to a worldwide audience is a definite treat. ‘The Daredevils’ – presented with the word ‘Shaolin’ awkwardly stuck in front of it during its unofficial worldwide release in the 80s – is one of the latest gems to arrive on DVD.

General’s son Yang (Lo Meng) escapes a massacre at his home that subsequently sees a corrupt, criminal syndicate in charge of the local forces. Seeking shelter with four good friends who are street performers, Yang plots his revenge though refuses to acknowledge the fearsome odds he faces. The quartet try to convince him to bide his time, but the young avenger sneaks into his former home and, after a battle against a few top fighters, is killed by their leader (Li). When Yang’s friends discover his tragic fate, they devise a way of defeating the killers without having to face their mighty army directly.

‘The Daredevils’ is another opportunity to see the Venoms in all their exuberant brilliance. This splendid ensemble film gives the genre’s most beloved quintet a chance to balance their rarely seen comedic talents with some of the most inventive action ever to appear in one of their productions. The story, which borrows from ‘The Count Of Monte Cristo’, starts slowly and unsteadily, yet Cheh is as ever building the camaraderie between the five stars and making the anticipation for the spectacular denouement especially tantalising.

The most obvious deviation from the tried-and-tested Venoms formula is the casting of traditional miscreant Lu Feng as a hero and, quite surprisingly, the move works very well. Of course Lu Feng’s presence as a villain, his fearsome gravitas, is missed as his ability to act as the perfect adversary for Philip Kwok et al. Yet there is something strangely refreshing to see Feng fighting shoulder-to-shoulder with Philip Kwok, battling the multitudinous throngs of enemies and rivals. The part of chief antagonist is also played by the more than capable Wang Li, the star often billed as ‘The Sixth Venom’ thanks to his close affinity with the team.

‘The Daredevils’ is not in possession of a particularly intricate plot, yet the allusions to ‘The Count Of Monte Cristo’ make a welcome entry to a standard genre theme of revenge. The careful machinations of the heroes creates a necessary air of tension while also helping to advance the storyline in a pleasingly off-kilter manner. That said, the real selling point of ‘The Daredevils’ is the spurts of fight action that erupt throughout the narrative. Granted, many will point to the relative lack of action compared to other great Venoms’ films, but with ‘The Daredevils’ the quality of what is on offer outweighs the necessity to throw empty spectacle at the screen. The final twenty minutes in particular is a remarkable conclusion to a satisfying Chang Cheh production, giving the Venoms their finest ever opportunity to highlight their obvious acrobatic skills. The sheer intricacy of their efforts here is well worth the price of the DVD alone.

The Venoms have made better, more ambitious and more emotionally engrossing films during their time together. Yet ‘The Daredevils’ is a fine opportunity to savour a great team of performers who always appear to be so comfortable together. Lo Meng and Sun Chien fans may be upset by the lack of screen time afforded to their favourites, but this is nevertheless a piece of Shaw Brothers’ magic.