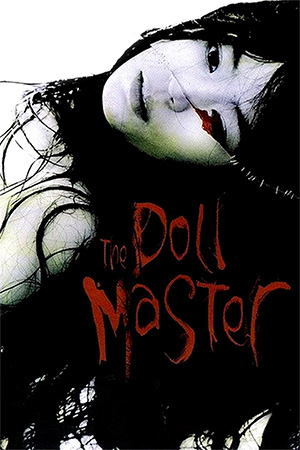 Damn creepy dolls. They’re, well, just creepy. And there are plenty of them in this Korean horror effort that is a little bit ‘Ju-On’, a little bit ‘Puppet Master’ and quite a lot of spooky fun. Five youthful types arrive at an isolated mansion in the middle of the woods to be life models for a doll maker who wants to make life-like dolls based on their appearances (as you do!). Not realising that being summoned to an isolated location inhabited by a spooky doll maker is perhaps not the best idea, the group soon realize all is not what it seems when members start turning up dead, a girl in red dress starts randomly appearing and the eyes of all the decorative dolls littered around the mansion start eerily moving of their own accord. Has an age old curse caught the group in its evil grip? Oh I think so!

While it relies a little too much on the creepy long haired girl ghost plot device (which has been diluted in recent years thanks to an overabundance of creepy-long-hair-girl-ghosts clogging up J Horror), ‘The Doll Master’ is an entertaining slice of freaky cursed doll horror. The narrative follows a fairly standard formula as the group assembles at the mansion: the heroine and hero are clearly defined, along with the annoying douche character and who will die first, and it’s also fairly obvious that everything ties into the curse shown in the opening prologue. So not many surprises narrative wise and it all gets a little tangled in its own plots strands and character connections come the climax. However, the ride to this finale is fun and benefits from solid acting and production values and the creepy doll/mansion designs.

Writer/Director Jeong Yong-Ki creates an unsettling atmosphere thanks to some slick and smooth camerawork, pacing the jump scares and not over doing them, and creating a genuine sense of dread thanks to the unsettling doll designs. The whole mansion is populated by the odd doll creations (even, bizarrely and somewhat humourlessly, on ceiling lights and in toilets!) meaning the characters are always surrounded by these disconcerting life like mannequins. There is a bit of gore thrown in as well and suspense is maintained throughout (despite the somewhat muddled ending) with a sense of melancholia also seeping into proceedings making this tale rather sad as well as scary. Hardened horror fans and those of a more serious critical persuasion may find it all a little silly but those who appreciate a good spooky story will find much to enjoy in this creepy Korean chiller.