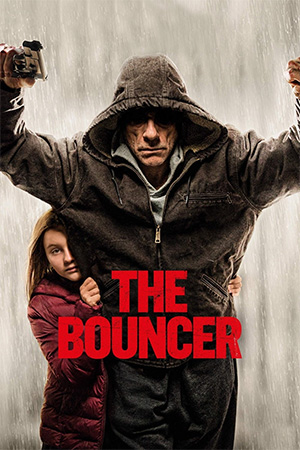 Dark and moody thriller from the director of ‘Sentinelle’, ‘The Bouncer’ gives Van Damme a meaty role to get his teeth into and he shines in this gloomy tale of trying to make a better life for oneself. Van Damme is Lukas, a single father in Brussels trying his hardest to bring up his young daughter in the best way possible. Bouncing at a local nightclub, misfortune comes a knocking when an unruly patron is accidentally killed on Lukas’s watch. Fired and left with few options, Lukas takes the offer of bouncing at a strip club run by a notorious crime boss. Once on the bouncing crew, Lukas is then put in a spot when a tough detective (Sami Bouajila) forces him to act as his mole within the club and get dirt on the owner. With little choice and in need of money, Lukas is forced to do the dirty work of both his employer and the police as he finds himself in ever-increasingly dangerous situations that put him and his daughter at risk.

Similar in style to Van Dame’s ‘We Die Young’ and ‘Until Death’, ‘The Bouncer’ is another showcase for the dramatic side of the kickboxing hero. A heavily film noir infused tale with bouts of painful action and violence, ‘The Bouncer’ is not a fun Van Damme flick but is a good and gritty one. Teaming with renowned director Julien Leclercq and setting the film in Van Damme’s home country of Belgium benefits the production, giving the flick a realistic sheen. Van Damme is great as the near-mute Lukas, his face and demeanour carrying the weight of the disappointments life has dealt him. The scenes he shares with his daughter are some of the best, giving little bits of warmth to the oppressive downbeat nature of proceedings.

While the film doesn’t need any comedy hijinks or Van damme doing his famous splits to lighten what is a serious story, ‘The Bouncer’ is nevertheless a relentlessly sombre film almost laying on the hopeless nature of Lukas’s predicament a little too thick. Thankfully there is some brutally staged action and several suspenseful one-take sequences that keep proceedings from dipping too much into a drudge. No fancy fight moves here, just hard edged beatdowns and punch ups relevant to the story and character, including an impressive scene where all the bouncer hopefuls for the strip club job must beat one another up until they’re the last man standing in order to get the job. It’s a brutal and exhausting scene but well-staged with Van Damme convincing as a tough, albeit tired, bouncer.

Perhaps not the most original narrative wise, ‘The Bouncer’ is entertaining thanks to solid direction, a great setting and an excellent performance from the Muscles from Brussels.