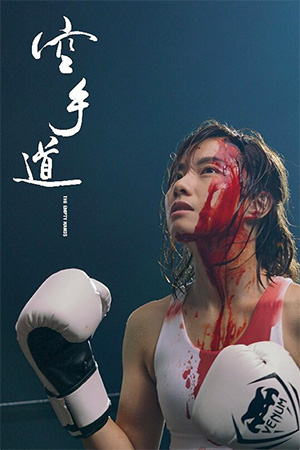 Chapman To Tang Wai But

I must confess to feeling greatly underwhelmed when I see Chapman To’s name on the cast list of a film. Actually, scratch that, when I see ‘Chapman To’ emblazoned on the screen I start to get cold sweats and mild nausea akin to a nasty bacterial infection. There’s something about his relentless mugging that can ruin even the best conceived piece though he remains massively popular in Hong Kong. To hear that To was making his directorial debut though, I felt oddly intrigued especially as Hong Kong cinema needs all of the fresh independent film-makers it can get these days.

Mari Hirakawa is the half-Japanese daughter of a noted karate teacher. When her father dies, the responsibility for the dojo falls on Mari, but the young woman cannot help but feel resentment for her upbringing in the martial arts. Mari longed for a good relationship with her father, but could only communicate with him through their karate lessons and now, feeling cheated by events, refuses to commit to the project. Matters are helped when ex-student Chen is released from prison and determines that he can make amends for past mistakes and help Mari appreciate her heritage.

It’s clear from the opening frames of ‘The Empty Hands’ that Chapman To has absorbed a great deal of knowledge from the directors he has worked with. There’s a confidence in the delivery of the first few minutes that promises much for the following eighty or so. Sadly, while To may have swallowed ‘Cahiers Du Cinema’, outside of the slick technical execution there is very little to involve the viewer. It’s the archetypal art-house film that is so self-indulgent that it forgets to tell a story with any real hook. This isn’t skilful avant garde film-making though; it’s empty posturing for the back-slapping intelligentsia.

It’s unfortunate that ‘The Empty Hands’ is, for want of a better word, ’empty’ – there are aspects to like here. Stephy Tang gives a plucky performance as Mari while, even in his brief appearance, Yasuaki Kurata oozes class. Chapman To should also be commended for some superb visuals and use of cracker-jack editing; these moments are impressive enough to show that Chapman To might be an interesting addition to Hong Kong’s directorial ranks. However, as a meditation on father/daughter relationships, ‘The Empty Hands’ is lazy and thinks that a slickly delivered camera shot is a good replacement for basic storytelling. It might be critically-lauded, but it’s also insufferably tough going even at a modest eighty seven minutes.

Chapman To Tang Wai But