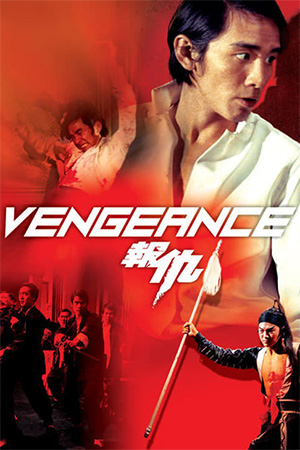 During the 1960s, Shaw Brothers concentrated on producing swordplay flicks but the arrival of the 70s saw a move towards more violent kung fu movies. ‘Vengeance’ is one such effort that sees Ti Lung and David Chiang reunited for their second film, although their actual on-screen time together is very limited. Due to the big increase in eye gouging and bloodshed, this could very well be the first Shaw film that will not appeal to fans.

The plot for this film is a typical one and is surprisingly simple. Set in 1925, the story opens with Ti Lung’s character Yu Lou as a Chinese Opera Player, who catches his wealthy boss flirting with his wife. Yu Lou delivers a physical warning to his boss at his Kung Fu School and simultaneously smashes his signboard. The boss becomes so furious with the insult that he ambushes and kills Yu Lou with the help of gangsters plotted around the town. His brother Xiao Lou (Chiang) is now determined to get revenge.

If you are looking for old school kung fu action, then ‘Vengeance’ really isn’t the movie for you. The majority of the fight scenes are very disjointed and feature an abundance of choppy knife duels. Although the occasional unarmed combat does still make an appearance, it is really spoilt by the use of a somewhat basic and uninteresting western style. That said though, this is probably Chang Cheh’s best directed film in terms of camera angles and shots. For example, the scene where Ti Lung’s character is killed intercuts with shots from the opera and also highlights David Chiang’s connection as the intended avenger. As an interesting side note, the film uses music composed by John Barry which is ripped from the 1969 Bond film, ‘On Her Majesty’s Secret Service’ starring George Lazenby.

There are definitely better films out there than ‘Vengeance’ but Chang Cheh’s experienced editing and camera work do still make it an interesting watch. Whether you can put up with the bland and predictable revenge story is an entirely different matter.