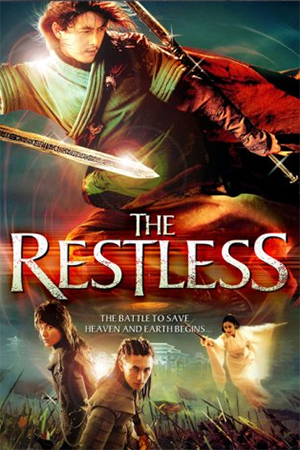 ‘The Restless’ is another visually dazzling action fantasy from South Korea, that certainly has style and touches of creative design to burn but is lacking in anything resembling an engaging story or characters we can emotionally invest in. A somewhat convoluted story about demons plaguing the earth and whisking people off to the underworld, the main crux of the plot deals with top demon slayer, Yi Gwak, being trapped in the afterlife (before his time) and trying to convince the spirit of his now dead love (who has lost her memory) who he is and that they were once in love. In addition, he must fend off his former team of demon slayers, who are also all dead and now a squad of ruthless killers in the afterlife hell bent on killing him. On top of this, some evil dude wants to unleash holy hell on the living world and it seems Yi Gwak is also the only person who can stop him.

So, yeah there is a whole load of otherworldly stuff going on that sort of makes sense come the final third but is rendered less engaging thanks to characters we don’t really care about and a wishy-washy love story that takes up too much of the running time and provides very little emotional engagement. Nothing wrong with hinging the story on the whole love-will-save-the-day ideal but at least make the characters somewhat interesting. The leads do try their best and there is nothing wrong with the acting per se, but there are just too many scenes of longing looks, painful exchanges and too much “why I am here?” and “this is not my time” exposition. The awful sugary music doesn’t help matters either. Also the bad guys never really feel dangerous (despite looking cool and brandishing badass weapons) and there is never any real threat despite the impressive looking demon warriors causing mayhem in several scenes of fight action.

Speaking of action, there is a fair number of fight scenes and battles to break up the monotony of the dragged out exposition scenes. In general they are visually stunning but lack any real bite and what choreography there is seems hidden under flashy editing and excessive slow motion. Yi Gwak is supposed to be some kind of supreme warrior type and certainly cuts loose in the fight scenes but this is hampered by him coming off as a bit of a wet noodle the rest of the time, meaning there is no emotional investment or fighting-for-his-life type tension come the fight scenes. On the plus side, ‘The Restless’ does incorporate some impressive CGI into the fights to help heighten the comic book feel. This means there are some visually inventive touches such as the slayers who shoot long chains with blades attached at the end out from their backs and an impressive battle where the hero creatively uses his sword and a bit of rope to take on a whole army of demons.

By no means a truly bad film and certainly recommended to those who love their love struck fantasy, the film is worth a look for the impressive style and design. But despite the visual opulence on show and a couple of decent set-pieces, ‘The Restless’ is just a bit of a shallow affair and not as much fun as it should have been.