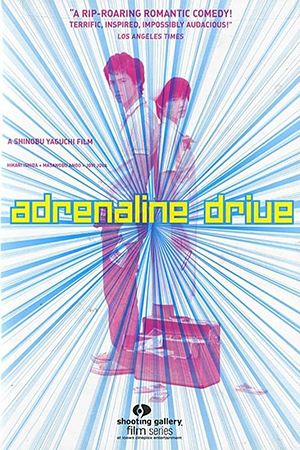 Satoru Suzuki (Ando) is the overly meek, constantly harassed employee of a car rental firm who sees his life turned upside down due to an altercation when out driving with his biligerent co-worker and their vehicle smashes into the back of a Yakuza-owned Jaguar. Suzuki is left to deal with the menacing gangster, Kuriowa, while his colleague flees and the dopey innocent is hauled off to a local gambling den to plead for clemency. Through another bizarre incident, the premises is destroyed in a gas explosion though Suzuki is left with only a bumps and bruises to contend with, while everyone – except a severely injured Kuriowa – is left dead. Satoru is aided by a shy nurse, Shizuko (Ishida), who helps the victim to the ambulance, unaware that her patient has helped himself to a case of Yakuza money. When Shizuko does realise where this mysterious stash has emerged from, she agrees to split the ill-gotten gains with Suzuki in the knowledge that everyone connected with the money is now deceased – or so it seems.

As Satoru and Shizuko learn to trust each other, Kuriowa manages to communicate his wishes to a gang of slack-jawed underlings who head off in hot pursuit. The fleeing couple manage to evade their hunters and end up in a distant location where they begin to enjoy the fruits of their dubious labour. Kuriowa is not to be fooled though and as his recovery continues, he plots a way of getting the 210 million yen back, utilising the head nurse at Shizuko’s hospital to complete his plan.

If there’s one director who can distil the essence of Japanese wit into a cohesive narrative while developing a style very much his own, it is Shinobu Yaguchi. Few film-makers in Asia – or indeed globally – have such a deft touch with comedy, weaving together gentle mirth, understated slapstick and the odd moment of black
humour. Later works such as ‘Swing Girls’ would see the director refine his ability to balance a story with wonderfully nuanced characterisations and hearty laughter to a superlative degree. Yet, despite being ever so slightly dog-eared round the edges, ‘Adrenaline Drive’ is a two-hour rom-com thriller turned road movie that is a celebration of the auteur’s exceptional skill.

As with the earlier ‘My Secret Cache’, Yaguchi mocks the Japanese obsession with materialism and riches, pushing his leads through all manner of tribulation in the zany chase for the yen. He gently mocks the Japanese psyche, satirising the apparent single-mindedness of even the most ordinary citizen. Nevertheless, his films give the heroes the chance of redemption, the opportunity to push aside their quest for cash in return for a far greater prize. In ‘Adrenaline Drive’ it is the offering to Satoru and Shizuko what they really aspire to: a sense of adventure certainly, but more importantly love and appreciation. Such sentiments sound awkward and cloying, yet Yaguchi develops the two leads into rounded characters whose reliance on each other is earnestly heart-warming.

Dead-pan, understated, though often surreal and extravagant, the comedy in Yaguchi’s films is a long-term reward. He favours long languid shots from one fixed position, quietly focusing on characters’ interaction with a notable lack of music or urgency. Some scenes are almost balletic in the design, each move, entrance and exit carefully plotted within each frame. One notable visual joke is a single take of literal money laundering by our long-suffering protagonists; it may not sound much in words, but it is a delight to behold.

Yaguchi is keen on strong heroines who appear vacant, yet have a stubborn industriousness that makes them impossible to beat. Shizuko joins the list of characters who exhibit this quality, unloved and isolated, but full of vim and vigour with just a gentle push. Satoru is her male equivalent, another person nudged aside by society who develops into a fighter when the odds are stacked against him. That their gradual love for each other is so beautifully sketched despite this primarily being a comedy is testament to the craft of those behind the lens.

‘Adrenaline Drive’ is often hilarious, sometimes filled with genuine tension and with a humanity at its core that is a delightful addition to the many other strengths. If you have yet to experience the work of Shinobu Yaguchi, this may be a good starting point.