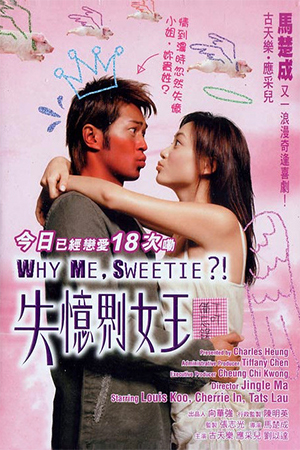 There comes a point in everyone’s life when, in a clear sign of impending maturity, one is no longer hypnotised by the loud, kaleidoscopic and ultimately vacuous world of Saturday morning television. You once found yourself staring in sheer amazement at the wondrous insanity of it all, but now you just sit with bewilderment and mild nausea as it washes over you. That statement may not be particularly illuminating, yet it seems a solid analogy for the feeling I had as the duration of ‘Why Me, Sweetie?’ passed in front of my eyes with the merciless onslaught of the Mongol army.

Suave cad Dong (Koo) is irresistible to the opposite sex and clearly knows it, treating women like a moderately interesting commodity. One particular beauty catches his eye while in Beijing though and her name is Ding (Ding, Dong…as sophisticated as that). Drama student Ding quickly succumbs to Dong’s slick charms, but is frustrated to find out that she has to wait in line with the other admirers to vie for his attention. Although humiliated, she is eventually afforded time with the adored one and Ding and Dong seem blissfully happy together. Then, the day after an especially successful date between the two, Ding is shocked to learn that the love of her life suddenly has no recollection of her or their romance. It transpires that, due to the death of his first real love, Dong suffers selective memory loss when he encounters anyone who looks or acts like her. Despite this awkward situation, the young student decides to win him back again and ensure that they can overcome his trauma together.

There was a time when perhaps I would have found the inanity of ‘Why Me, Sweetie?’ charming, maybe even cute, yet now I can feel my blood-pressure rising unnaturally after only the first few minutes. Loud, pulsating music of the ditzy variety envelops these moments, then Louis Koo appears in the story once again overplaying that smug persona he is often saddled with. Louis Koo is to arrogant womanisers what Kwan Tak Hing was to Wong Fei Hong and struts around like Mick Jagger after hearing about the profits of the last ‘Rolling Stones’ tour. Occasionally there appears a director who can make this kind of character interesting and even charming by the films end, but Jingle Ma is clearly not that man. Ma believes the easiest way to punish his leading man a is make his love interest a churlish brat with a collection of dim-witted friends who spend most of the story screaming. Yes, that leading character looks like Cherrie Ying, but even the most uxorious of men would be seeking the services of a hitman after just a couple of minutes with her. Everyone is destined to be stuck in a lift with this kind of brood at some time in their lives, hopefully sitting through this film buys my way out of that punitive day.

A few moments allow you to think you’re watching a better film than you actually are and Jingle Ma utilises his former skills as a choreographer to make Beijing look as splendid as possible. Shots of the couple enjoying summer in the capital together do eat their way into the part of the brain that is quick to forgive lacklustre film-making. Just when such scenes threaten to charm in the way the genre should, another cinematic cudgel is used to bludgeon our brains into oblivion. Initially it is the suffocating faux whimsy that oozes out of every scene, then, in the second half of the story, it is lachrymose melodrama that is rendered unwatchable due to how incongruous it feels in such a light-hearted vehicle. Perhaps ‘Why Me, Sweetie?’ is intended to be a ‘My Sassy Girl’ clone, mixing contrasting emotions with deft direction, but it fails to replicate any of the qualities of the Korean hit. Simply put, this is a film to avoid, no matter how interested in rom-coms you are.