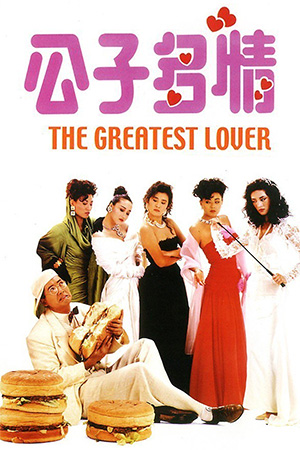 Locomotive Fat, Skyscraper Eric and Chicken Noodles are three Mainland friends who decide to illegally enter Hong Kong in search of the better life. After receiving all of the necessary aid from their close friends and family on the Mainland, the three prepare for the arduous swim to their Promised Land. On finally completing the journey, the three are inadvertently separated and Locomotive Fat finds himself hiding under a table at the engagement party of wealthy businessman Headman See. The supposedly happy occasion that Fat is an unwanted guest for soon turns sour as See’s intended fiancé has only arranged the event with her friend so that they can make a mockery of See. During the ensuing chaos, Fat’s hiding place is revealed and this slovenly figure is left standing in front of the high class crowds. See’s initial anger at seeing this intruder is turned into an intriguing plan of revenge against the two women who publicly humiliated him. Taking Fat to the etiquette and grooming expert Anita, See concocts a scheme to take this bewildered outsider and make him into the new star of high society, breaking the heart of See’s enemies on the way. Changing Fat proves to be a mammoth task and matters aren’t helped by the interference of the conniving Skyscraper Eric. After endless frustrations though, the new Fat is ready to explode onto the social scene and mete out See’s unusual revenge.

In one of his many comic roles of the mid-80s, Chow Yun Fat stars in what is essentially a reworking of ‘Pygmalion’ – albeit with a few twists. This premise is a strong starting point for what could have been a hilarious comedy of manners. However, although the film is enjoyable and at times endearing, parts prove to be better than the whole. Firstly on a positive note, ‘The Greatest Lover’ contains some amusing moments that keep the overlong running time moving at a considerable pace. The cast is everything one would expect from a big-budget Hong Kong comedy with many familiar faces present in the film. Director Clarence Fok imbues this comedy with a real visual quality that is synonymous with his name and there is no doubt that this adds a stylish element to the proceedings.

Importantly though, ‘The Greatest Lover’ falls down in some key areas that prevent it from being a more substantial comedy. In the lead role, Chow Yun Fat puts in one of his most over-the-top performances; therefore he swings wildly from completely annoying to slightly charming throughout the production’s course. With Eric Tsang playing his usual loud and crass ‘friend’ it can sometimes be hard to care too much for the supposed heroes. This is especially the case by the film’s finale when Chow leaves one prospective bride broken-hearted at the altar to find his true love (though the names obviously won’t be revealed here). Within the ‘The Greatest Lover’ there is also the typical stereotype of the Mainlanders being backward and absurdly coarse. Not too long into the storyline, this particular comedic device outstays its welcome even though there’s an attempt to wring out some melodrama from it at the climax.

The final word therefore is that ‘The Greatest Lover’ is certainly worth catching, but there are simply too many annoyances for this to be anything special.