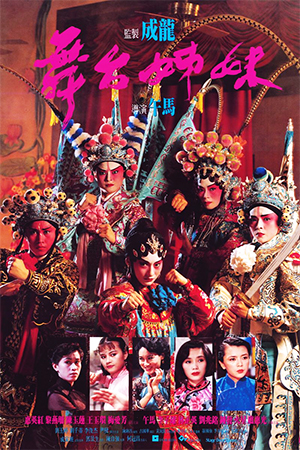 When a western production, predominantly an action film, utilises a strong female lead, the results tend to draw appreciative reviews from critics and moviegoers alike. While the concept of a lead actress capable of holding her own in a typically masculine genre is quite a rare one in Hollywood, Hong Kong has enjoyed a long history of the concept. The Jackie Chan-produced ‘Stage Door Johnny’ is the kind of film that may have raised eyebrows a few years ago in the west, but had little impact in its native territory. Most of the main characters are female and, during the various action set-pieces scattered throughout the film, they outshine the men constantly.

Pops (Wu Ma) is the owner of an all-female Chinese Opera troupe stationed in Shanghai. Despite their consistent hard work and impressive operas, the crowds are diminishing and Pops begins to wonder if he can support all of the performers in the troupe. With one last throw of the dice though, he decides to pay for famous Peking Opera starlet Tsui (Hui Ying Hung) to join the show and hopefully entice the audiences back. Unfortunately for him, the differing prejudices of Tsui and the existing performers creates an initially imposing barrier; Tsui constantly looks down on what she considers an unsophisticated form of Opera performing while the other performers are annoyed by her attitude and pay. Gradually, these differences are forgotten as Tsui and the lead vocalist form an unsteady friendship, while the actual performances are achieving sell-out crowds. The sudden success of the troupe and the obvious charm of the beautiful actresses is not ignored by local crime boss Mr. Chang though and his intervention ignites a new threat to the Pops’ hard work. With a threat from the mob and one of the actresses’ involvement with Mr. Chang’s honourable enemy (Waise Lee), the inevitable complications lead to the troupe having to take on the aggressors head on.

In some ways, ‘Stage Door Johnny’ is almost a serious version of another Jackie Chan-produced hit ‘The Inspector Wears Skirts’. There are some notable differences – mainly the time period of the storyline and its characters occupations – but the execution of the many scenes is very much like the aforementioned action/comedy; the sub-plot focusing on the animosity between Tsui and the other performers is perhaps the most obvious example of this. This isn’t a major drawback of the film though – it still proves that few industries around the world can fuse action, drama and comedy in quite the same as Hong Kong did.  With ample use of Jackie Chan’s famed stuntmen club, Wu Ma throws some effective action sequences into the film and, though there’s doubling present, the actresses all perform superbly. The production is also packed full of faces that instantly recall the heady days of 80s Hong Kong cinema eg. Chung Fat, Lam Ching-Ying, Mars etc. On top of this is a few excellent performances including Kara Hui, Waise Lee, the always reliable Wu Ma and, in a bigger than expected role, Ken Lo.

If there was to be one major gripe about the film, though, it would probably the sheer predictability of it. The tensions between the characters and the gangsters has been seen countless times before while the various problems that the troupe members have are on the same level as an average soap opera. To western eyes then, ‘Stage Door Johnny’ will probably seem too melodramatic to be effective; the more forgiving viewers may not feel quite so strongly. Despite never straying towards originality and unlikely to win awards, there’s still an admirable mixture of action and drama to commend. Wu Ma is often rated solely as an actor, but it’s important to remember that he’s an accomplished director in his own right. In his hands ‘Stage Door Johnny’s faults never become too distracting and the construction of the film is at least competent. A good three star film that’s worth purchasing due to its cheap price tag.