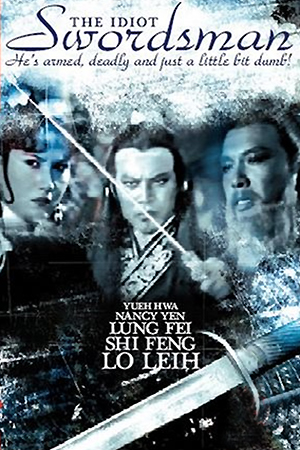 The heroic ‘Drunken Knight’ was once famed for his chivalry and interest in those seeking justice, but suddenly he disappears from the martial world without leaving any clues as to his identity. Years later, a cocky oaf blunders his way to victory against a team of local bandits and is suddenly championed by villagers as the much-missed ‘Drunken Knight’. Despite being hopelessly out of his depth and in no way capable of living up to the name, he is secretly aided by a talented swordswoman who has a crush on him and dispatches the foes expertly enough for the pretence to continue. The so-called ‘Drunken Knight’ is also followed by an adoring student who seems to be hiding his own interesting identity and the team now venture out into the wilderness to take on fearsome warlords.

In some ways drawing on that great novel ‘Don Quixote’, ‘The Idiot Swordsman’ is a good example of a fine concept scuppered by a low budget and, more significantly, insipid direction. Independent genre films were particularly common during the late 70s and its therefore little surprise to see noted stars as Yueh Hua and Lo Lieh making appearances. Unfortunately this weak production is some way off the kind of work that both actors were churning out in their Shaw Brothers heyday. ‘The Idiot Swordsman’ is a good example of stars sleepwalking through the duration with the dangling carrot of the pay cheque gently wafting in the horizon.

The awkward anti-hero lacks charm, but does gradually advance to being watchable as the film progresses. Yueh Hua, meanwhile, floats through the story with little interest and his moments of action are woefully pedestrian for a genre flick of this time period. As director Cheung Git shows little intention to create any tension between the fights, this mundane choreography is especially emphasised. The occasional moment of promise – with the ‘hero’ finding ever more unlikely ways to keep his true identity concealed – eventually gives way to weakly constructed film-making of the kind that blighted so many indies of the period.

‘The Idiot Swordsman’ is a disappointing use of cast and concept, choosing to tread very tired ground rather than explore the full potential of the story. In this respect it stands out as particularly disappointing and especially hard to warm to – even those less interested in story than in action with find little to stir the soul here.