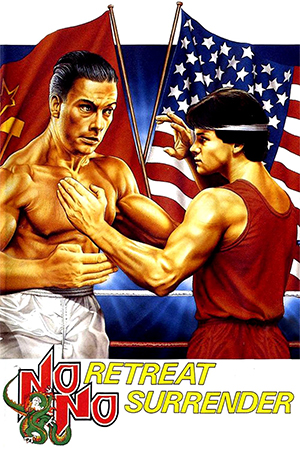 This is a groundbreaking film in many ways, as not only was it one of the first American movies to have a predominantly H.K. influence in director Yuen Kwai and producer Ng See Yuen, but it also gave the “muscles from Brussels” his first big break.

The storyline is thin and plays on stereotypes in true ‘Rocky’ style, pitting a newly trained American against an evil Russian (real cold war stuff!) as well as the token break dancing black guy! However, the action is unusually good when you consider that it is American, and mid 80’s. Unlike ‘China O’Brien’ this film makes good use of Hong Kong techniques, making the fights fluid and fast, getting the best out of some average to good martial artists. Peter Cunningham doesn’t shine here but made an excellent villainous cameo soon after in ‘Righting Wrongs’ also directed by Kwai.

The middle ‘training sequence’ section of the film is interesting as it sees Jason (McKinney) being trained by the ghost of Bruce Lee, played by Korean martial artist Kim Tai Chung, who was also Bruce’s double in ‘Game of Death’ (action doubled again by Yuen Biao). He does a good job in the circumstances, (his voice was dubbed) and shows some eerily good Bruce-like impersonations and an excellent one-inch punch!

The final reel is comic book stuff, as Ivan the Russian (!) beats the Seattle Karate Team single handed, in what must be said are some short but nicely choreographed fights, before Jason steps in and promptly dishes out a beating, Bruce Lee style! It all seems a little perfect and ‘feel-good’ as the credits roll, but this is to be expected from a mid-80’s American, low budget actioner.

If you haven’t seen this film, then make sure you at least rent a copy, as you will be pleasantly surprised. It’s far better than other American style martial arts movies such as ‘China O’Brien’, ‘American Shaolin’ and the like, showing what can be done if a little extra time is taken over the choreography, even if the lack of time elsewhere shows!