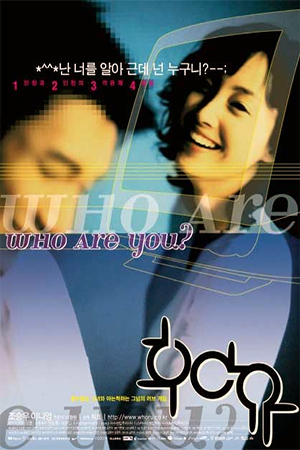 There’s a moment an hour into ‘You’ve Got Mail’ – one of the very few Hollywood rom-coms to charm me – that Tom Hanks discovers that his arch-nemesis is actually the delightful woman he communicates with via an internet chatroom. For the rest of the film, Hanks has to try to convince her that he isn’t a megalomaniacal ogre she thinks he is before his internet identity surfaces. Korean production ‘Who Are You?’ takes this premise and extends it to over 100 minutes, borrowing a healthy dollop of Hollywood inspiration and combining it with a low-key Korean vibe.

Video game programmer Hyungtae is among the team who are developing a new online dating game that hopes the revolutionise the industry. As he tests the beta version of the game, Hyungtae – under the name ‘Mello’ – meets Byulee, a young woman who is openly critical of the game. After Hyungtae spends some time online chatting to Byulee, he decides to track her down and find out if ‘Byulee’ is anything like her real-life identity. Byulee – or Inju as she is in real life – works very nearby in a SeaWorld marine park and Hyungtae finds that she is just as amiable as her online personality. Unfortunately the real-life feelings are not reciprocated by Inju and she regularly belittles the seemingly brash and insensitive Hyungtae to his far more understanding nom de plume. The lovestruck programmer has to try to use his alias to show to clear his name while always aware that he must someday reveal his true identity.

As with many films that use dramatic irony, there is pleasure to be derived from the fact that the viewer and the hero share knowledge that other characters are ignorant of.  ‘Who Are You?’ rests the weight of the whole film on this information as we are always aware of Hyungtae’s fictional persona. This factor means that any enjoyment is reliant on whether the audience is patient enough for the desired resolution and whether the lead couple’s relationship has the empathetic core that a narrative can be based on. For much of the early part of Choi Ho’s film, the answer is a resounding ‘no’. The opening thirty minutes are a confusing mish-mash or character development and garbled exposition that does little to involve the viewer in the on-screen dynamics. Hyungtae’s position and the introduction of his virtual dating site are sloppily introduced, making it difficult to care about what will happen.

If the viewer can drag themselves through this uninspiring portion of ‘Who Are You?’ then an enjoyable rom-dram awaits. The storyline gradually lifts itself out of the mire and the focus switches to Hyungtae and Inju rather than their mishandled backgrounds. Choi Ho seems to identify a more fruitful way of adding layers to the characters – make the narrative a cohesive whole and help us develop a sympathy for the stars, then their past can be more appropriately mined. By the time the film enters its closing third, a slight, yet tangible tension helps us to stay attentive and wait to see Inju’s response to the truth. While productions of this nature tread familiar ground and build up to a common denouement, the journey to that point can nonetheless be savoured.

While ‘Who Are You?’ builds in momentum and in overall entertainment value, it still faces a stumbling block with its heroine. Inju’s plight may be touching, but the character ends up wallowing in self-pity for far too much of the running time, implying that no-one around her can have endured the privation she has survived. In making his leading lady appealing and yet trying to explain her social awkwardness, Choi Ho is in danger of losing our interest by overplaying it, though a closing outburst by Hyungtae is a strangely cathartic experience given the selfishness of his beloved.

As you can no doubt deduce from the previous paragraphs, ‘Who Are You?’ is prone to peaks and troughs. Moments of real tenderness are present though so are awkward intrusions by background characters and sub-plots. Given its woeful start, this surprisingly manages to endear for most of its running time. It may have weaknesses that wreak of uneven handling by the director, but its two main cast members courageously battle through such obstacles and help this topsy-turvy film achieve a certain charisma.