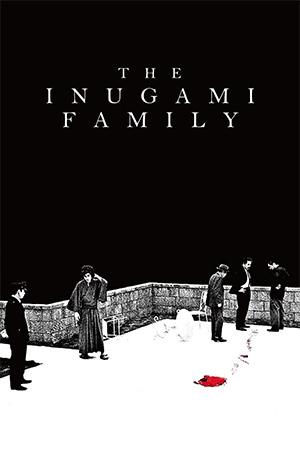 Kosuke Kindaichi is a beloved detective of Japanese print, first brought to the page by author Seishi Yokomizo in 1946. Since that debut, Kindaichi has appeared in over seventy novels, manga spin-offs and television series. In 1976, ‘Burmese Harp’ director Kon Ichikawa took on the responsibility of translating the character to cinema with ‘The Inugami Family’, a film that proved successful enough to start a popular series.

The patriarch of the wealthy Inugami family gathers his sons, daughters and grandchildren to his sickbed as he draws his final breath. The discussion of who will inherit the powerful Inugami pharmaceutical company is the topic of conversation among those gathered and when the head dies, they await the reading of the will. Surprisingly though, the main beneficiary of the will is the timid girl who looked after the patriarch but wasn’t actually part of the family. There is one catch though: to inherit the company she must marry one of the three grandsons. While she makes the decision, there is a murder on the estate and the police are left baffled as to whom is responsible. Enter eccentric detective Kindaichi, an awkward and somewhat dishevelled figure who inserts himself into the family drama. Yet the bodies pile up and the situations become even more complicated as the date for the inheritor to make her decision comes closer.

I’ve heard some compare Kindaichi to a Japanese forerunner to beloved US character ‘Columbo’, perhaps even a slight inspiration. As an enormous fan of the Peter Falk creation and all of his 68 cases, this piqued my interest. The fact that a director of the calibre of Kon Ichikawa is behind the lens makes this an even more mouth-watering prospect. ‘The Inugami Family’ was a big hit on its release in Japan and it’s easy to see why; the whole production benefits from excellent performances and slick direction. There is no doubt, therefore, that this is a cinematic affair rather than an expanded television movie.

The success of detective stories of this nature are two-fold; there needs to be a complicated, but logical plot free of any deus ex machina devices to solve things and the charm of the main character are key. On the latter, ‘The Inugami Family’ hits the mark and as soon as floppy-haired Ishikaza wanders into town, Kindaichi comes to life. The character is that perfect combination of vagabond and genius, finding crime solving infinitely easier to deal with than human relationships. Ishikaza plays Kindaichi with a delightful naïve charm that gives him an almost apologetic air in the middle of the intrigue. He may be rough around the edges, but when Kindaichi is on the screen the story comes alive.

On the former point of storyline though, ‘The Inugami Family’ stumbles. Much like the very first ‘Columbo’ episode (yes, I am continuing with the comparison) ‘Prescription: Murder’, the unorthodox hero isn’t in the story enough and when he isn’t interacting with the others, the convoluted plot becomes a tougher proposition. There are twists and turns as the genre demands, but they don’t appear organic and if anything slow down the pace of the narrative. Kindaichi, though the film’s strength, is also a passive detective who stumbles on much of the solutions by accident or convenient occurrence. Kindaichi never gets the chance to battle intellects with anyone in the way the traditional protagonist tends to do. I’m not familiar with the books so cannot say whether this is just the way the character is written, but in ‘The Inugami Family’ it tends to mean that Kindaichi’s skill is quite reliant on blind luck.

‘The Inugami Family’ has all of the plot contortions of an Agatha Christie novel and, like the British author, takes place in a world of money and privilege. Ichikawa has put together an attractive and professional interpretation of one of Japan’s beloved characters. Yet there is the nagging feeling that Kindaichi is slightly wasted here – and when the camera isn’t on the oddball sleuth, ‘The Inugami Family’ is never quite as absorbing as it should be.