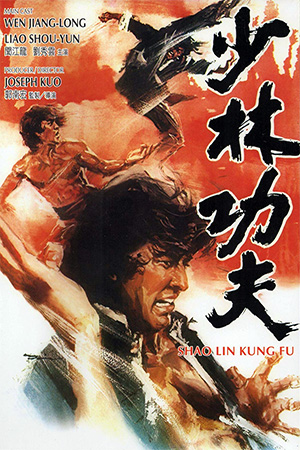 Joseph Kuo has never exactly been a director renowned for setting the film world alight but he has been responsible for the occasional rose among thorns.  Sadly though, ‘Shaolin Kung Fu’ isn’t going to do wonders for his already questionable reputation.

Lin Fung is a humble worker at the local rickshaw business who spends the majority of his time caring for his blind wife.  All is well until the dastardly Tong Yang brings his rickshaws into town and starts using his hired muscle to dominate the clientèle.  However, Lin Fung is not the kind of man to take this lying down and consequently becomes involved in several brawls with the new kids in town.  This is not a wise move though as Tong Yang is a highly connected man and doesn’t take kindly to resistance in any form.  Swooping quickly into action, he kidnaps Fung’s wife and demands he hand himself over.  Will he give up all his has fought for and save the life of his wife or risk the greater perils that await him?

Clearly inspired by the Shaw Brothers offerings from the era, ‘Shaolin Kung Fu’ uses a standard revenge tale as a springboard for a series of fight scenes. Unfortunately though, the plot is about as basic and boring as you can get and the assembled cast of bit part players lack the abilities to lift the proceedings. This could of course be overlooked if the film were loaded with high class action, but sadly this is most definitely not the case. The majority of the combat is made up of simple punches and kicks, and the fact that all of the bad guys seem to be fat 40-year-olds doesn’t exactly make it seem like a fair fight.

‘Shaolin Kung Fu’ is really just a series of weak fight sequences strung together by a paper thin plot. If you’re absolutely desperate to see another kung fu movie then it may just suffice, but I’d advise the rest of you to give it a wide birth.