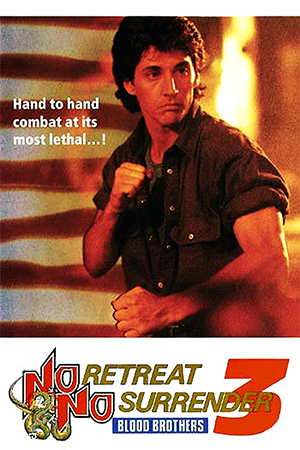 Although these films are titled “No Retreat, No Surrender”, they actually bare little resemblance to each other with varying plotlines and different characters. However, ‘Blood Brothers’ at least has Loren Avedon return from the previous instalment to add some sort of continuity.

As you may have read from my reviews of ‘No Retreat, No Surrender’ parts 1 & 2, I am a big fan of these types of 80’s martial arts films, and part 3 follows in a similar vein. Like it’s predecessors, it is produced, choreographed and directed by Hong Kong filmmakers and as a result is a much better action film than most of the American B-movie actioners of the time.

In terms of action, there are plenty of fight sequences, which are high-tempo, well choreographed affairs, if a little short by Hong Kong standards. That said, most of the performers do their jobs admirably, especially Loren Avedon, who proved in part 2 (as well as other films such as ‘King of the Kickboxers’) what an excellent screen fighter he is. The other main star, Keith Vitali (of ‘Wheels on Meals’) also performs well and has rarely looked quicker on screen. The action is of a comparable standard to the 2 prequels but is not up there with 80’s Hong Kong output. But to be fair, nothing could be!

The story is the usual generic revenge tale; involving 2 brothers who don’t get along being reunited to avenge their father’s death. It isn’t particularly well acted, and is fairly implausible at times, but this only adds to its novelty value. Ultimately, it is the quality of action that we are really interested in, and as a result the film gains a firm 3 star rating.

I have mentioned it before, but from watching films like this, I am very surprised that Avedon never made the move to perform in Hong Kong films, as the Western villain was particularly popular in the late 80’s and he is one of the better American screen fighters of the time in my opinion. However, if you want to see more of him, he made (and still is I believe) plenty of straight-to-video American fight films with people like Cynthia Rothrock.