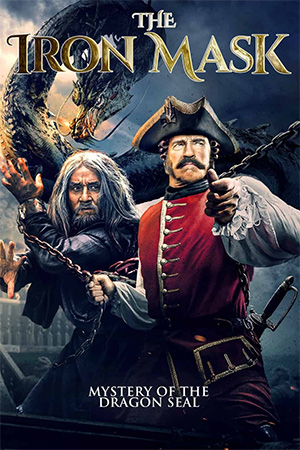 This Chinese/Russian co-production is a sequel to ‘Viy’ (which also goes by the title, ‘Forbidden Kingdom’), and is being hawked on these shores as ‘The Iron Mask’ (but also goes by ‘Viy 2’ or ‘Journey to China’, amongst various other convoluted titles!). Managing to rope in action titans Jackie Chan and Arnold Schwarzenegger, they join returning cast Jason Felmyng, Charles Dance and Anna Churina for another romp around the world and through the mystical.

I say returning cast members a Charles Dance is barely in the film and Flemyng is side-lined for a good chunk of the running time (as his cartographer character is sent off to map the Far East section of Russia and some of China). Instead a good chunk of the film is handed over to heavyweights Chan and Schwarzenegger battling one another in the Tower of London which (somehow!) leads to the escape of Peter the Great (Yuri Kolokolnikov), he being the man of the iron mask, who also sets sail to China with the aim of reuniting the mysterious Dragon Seal with an ousted Princess (Yao Xingtong) so she can take back her kingdom from an evil witch (Ma Li). Phew! One way or another, all these characters and their journeys converge on a mountain in China for a massive battle and the unleashing of a fabled dragon.

That’s just part of what’s going on in ‘The Iron Mask’ as it crams in an awful lot into its two-hour running time. There are also various CGI creatures, pirates, Flemying’s loving wife (Churina) along for the ride, fights galore and (blink and you’ll miss him!) Rutger Hauer! ‘The Iron Mask’ is certainly ambitious and is rarely dull but often overly convoluted and at once seems rushed and oddly also seems to drag as its tries to fit all its characters and storylines in. Chan and Schwarzenegger add some extra star power though they’re by no means the leads (despite what the advertising might have you believe!) but have enough of a presence to matter. Unfortunately, it’s Flemyng who suffers this time around, his screen time reduced to fit everyone else in with main lead duties being handed to Yuri Kolokolnikov. Shame really as Flemyng was one of the fun aspects of the original ‘Viy’/’Forbidden Kingdom’.

So Chan fans may be disappointed he’s not the main focus but he does feature in an inventive scrap with Schwarzenegger and overall there is some cool action on offer (courtesy in part of the JC Stunt Team!), not least during the China set section when some giant samurai like soldiers turn up (think ‘Big Trouble in Little China’ on steroids!). There’s certainly some creative set-pieces on show but the slatherings of CGI will irk some and give the film a cartoon/bubble-gum sheen. There are some impressive sets on display showing the scope of the film, but all too often they’re also augmented with the abundance of CGI and massive green screen backdrops. While the CGI in general isn’t too bad there’s just a lot of it and coupled with copious dubious dubbing, a lack of focus and too many characters (and not enough Chan and his stunt team!), means ‘The Iron Mask’ is enjoyable in fits and starts but not quite the rollicking adventure it could have been