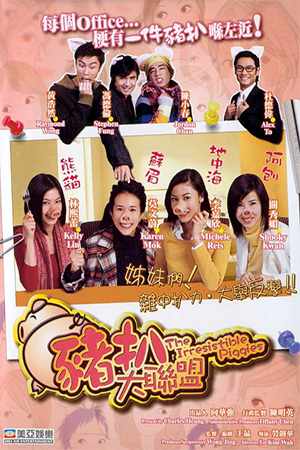 Liu Kim Wa, director of the criminally underrated ‘Sunshine Cops’, presents viewers with an intriguing premise: take four of Hong Kong’s most beautiful actresses and turn them into a quartet of viciously persecuted, constantly ridiculed ‘piggies’. Though the thought of each of them in some way hindered by a physical flaw could never be expected to sustain a 100 minute running time, ‘The Irresistible Piggies’ is thankfully not just a one-trick pony, relying on a gimmick to attract an audience.

When Sai (Wong) joins his cousin Lun (Fung) at mobile phone company LMF, he meets four women who are saddled with the unpleasant nickname of the ‘Four Piggies’ due to their physical blemishes. Firstly there is Mo (Reis) who, though she immediately catches the eye of Sai, has been afflicted with an unfortunate loss of hair since she was young. Then there is wild security guard Mei (Mok) who is covered from head to toe with thick, black hair and Hung (Lin) who secretly likes Lun, but is hindered by an aggressive red birth-mark that covers her face. The finally member of the unenviable team is the adorable Pao (Kwan) who is mocked because of her buck-teeth and narrow eyes, though her love for her kind boss (To) remains undiminished. Despite the mockery they endure from their colleagues, Sai decides to champion their cause and, hopefully, impress Mo – whose unusual affliction is hidden from him by her ubiquitous cap. The ‘Piggies’ are made redundant when the company down-sizes, but decide that they have been pushed around for far too long and decide to fight back. With the help of the ludicrously camp Spring (Chan) the quartet attempt to beat their colleagues’ prejudices while they also search for a cure for their very individual problems.

Scripted and produced by Wong Jing, ‘The Irresistible Piggies’ has few of his commonly crass touches though it is an over-the-top comedy. Jing provides a good-natured screenplay that manages to take the leading ladies and make them much more than figures of fun for the audience – the thankfully restrained script shows that Wong Jing doesn’t always need to scrape the bottom of the barrel in an attempt to entertain. Though the film isn’t a work of great art, director Liu Kim Wa ensures that the primary objective to entertain is properly realised and any potential decrease in pace is happily avoided.

While this enjoyable comedy benefits from winning turns from Stephen Fung, Raymond Wong and an outrageous Jordan Chan, this is definitely a film that belongs to its female leads. The ‘Piggies’ and their strong-willed determination to be accepted is one reason why a potentially awkward movie is much better than it implies; the four actresses are constantly endearing and prove once again that Hong Kong still has a significant amount of talented performers both male and female. The always-watchable Karen Mok steals nearly every scene she’s in, while Suki Kwan is delightful as Pao.

‘The Irresistible Piggies’ is a comedy that is perhaps best appreciated by viewers who are now accustomed to Hong Kong’s big screen laughs. The laughs can be a bit too parochial for inexperienced viewers while the sudden mood change from touching romance to typically surreal canto-humour may be too jarring for some. However, despite its quirks and eccentricities, this is still a feel-good film that is more hits than misses.