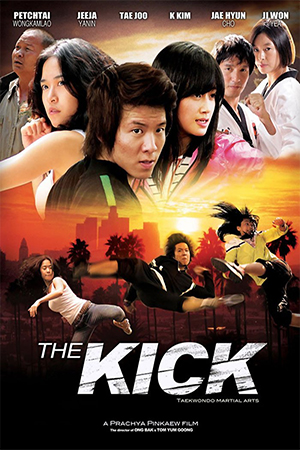 Taekwondo master Moon is moments away from becoming world champion, but is viciously injured by his French rival and is forced to give up his ambition. He decides to move to Thailand and, with his equally proficient wife, raises three children who he keenly trains in the martial art. Their respective skills come in handy when a chance altercation brings them into contact with a gang of high-kicking thieves who are targeting a Thai treasure. Though Moon’s family foil the robbery and are elevated to the status of national heroes, the villains are soon planning their revenge.

‘The Kick’ is the latest fight flick from director Prachya Pinkaew and his right-hand man, action choreographic genius Panna Rittikrai and is careful not to deviate from the formula that has produced such seminal works as ‘Ong Bak’: Pinkaew provides the skeleton – and it is a skeleton has plots are rarely much more than marrow in his films – and Rittikrai pushes the supple stars with fight scenes that verge on the torturous. Yet despite the inclusion of Korean stars, ‘The Kick’ is familiarity that may not breed contempt, but does little to stir the soul.

As always there’s the MacGuffin of a stolen object – every bit as inert as you might expect – and even a late appearance by a few elephants who, given their fabled powers of recall, must be especially bored by the repetition of the plot. What there is not, though, is any reason to be engaged by the characters or their predicament, despite efforts to add family melodrama to the mix. There’s also the little matter of the antagonists: a real threat for the heroes is the cornerstone of a great action film, but in ‘The Kick’ the villains carry all the menace of an inflatable hammer.

‘The Kick’ is primarily a fight film and with Panna Rittikrai pulling the strings a certain level of excellence is expected. Rittikrai fashions numerous scenes of mayhem and gets the flexible newcomer Na Tae-Joo to perform the kind of outlandish kicks that seem to defy logic. There is a strong feeling of deja-vu after an hour of such scenes, but Rittikrai rewards the patience of the viewer with a remarkable finale that drags ‘The Kick’ from the pit of mediocrity. Inspired by Jackie Chan’s use of props and environment, this section of the film is just about worth waiting for.

Pinkaew and Rittikrai need to evolve beyond merely churning out ‘Ong Bak’ clones though as there is a very real danger of their work falling into self-parody. The best films of Jackie Chan and Sammo Hung which clearly provide inspiration take the task of telling a story far more seriously and as a result give their action scenes a proper emotional context. This is why ‘Police Story’ or ‘Wheels On Meals’ will look fresh and vibrant long after movies like ‘The Kick’ are forgotten. We can only hope that the next Pinkaew/Rittikrai shows more understanding of what makes a great film tick rather than just be a mildly distracting showcase for physically gifted performers.