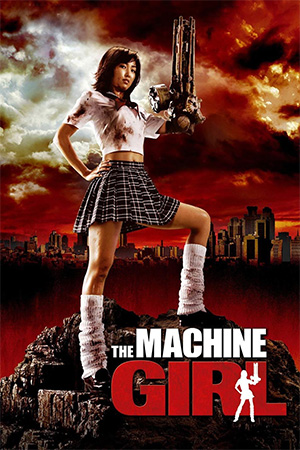 The simple tale of a school girl who sets out on a mission of revenge to find those who killed her brother, albeit with a large machine gun for an arm. Manga in motion strikes again as the Japanese push the limits of onscreen gore in a mad but very entertaining exploitation flick. Comedy and excessive violence merge onscreen together as Hyuga (Yoshiro) goes all revenge like, killing the bullies and Yakuza who slayed her brother. Injured in the course of action, her arm severed, she holes up with a couple of mechanics whose son was also killed by the bullies/Yakuza. Training Hyuga to fight, they design and build a machine gun to replace her arm, and then joining forces they all set out to kill everyone in the most bloody way possible.

Slick, funny and oh so gory, ‘Machine Girl’ is Eastern exploitation done right. Managing just the right balance between funny and gory and never outstaying its welcome, ‘Machine Girl’ is out right craziness with belly laughs, all the while retaining a sense of cool. It is no doubt the type of film Tarantino would endorse and rave on and on about if he saw it all before us. The cast throw themselves into the absurdness, some very nasty characters merging and two feisty females we root for as they blow people’s heads off and fight with ninjas. Yep, ninjas even make an appearance in a very cool fight sequence. On top of that, there is all kinds of gore, drill bras (!), demented Yakuza mothers, a chainsaw leg, more cool fights scenes, loads of gunfire and tons and tons of blood.

Much like the other ultra gory Japanese film doing the rounds as the moment, Tokyo Gore Police, ‘Machine Girl’ features copious amounts of blood gushing all over the place. Comic book in tone and ultra violent in execution, the violence is giddy, gleeful stuff that gorehounds will soak up. Unlike Tokyo Gore Police (both films come from the same company, Tokyo Shock) ‘Machine Girl’ paces its gore and action scenes meaning we get time to breathe between the next onslaught of severed limbs. ‘Machine Girl’ is the slightly better, and better made, of the two flicks, overall more satisfying and genuinely funny.

Slick, sick exploitation ‘Machine Girl’ is absurd Japanese cinema at its best. About as subtle as a kick in the balls it is nevertheless well designed, gore soaked, action packed and surprisingly funny entertainment. And it’s also about as good as any flick about a girl with a machine gun for an arm is ever going to be. Great fun.