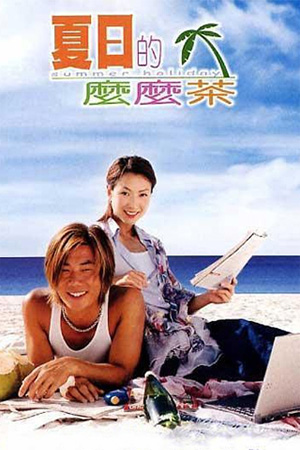 Hot on the heels of the massively successful ‘Needing You’, came the bright and breezy hit ‘Summer Holiday’. Teaming Cheng with Richie Ren, ‘Summer Holiday’ takes the action away from the usual Hong Kong metropolis and centres it in the idyllic landscapes of a Malaysian beach resort.

Summer Koo’s life falls apart when her boyfriend unceremoniously dumps her and her financial situation quickly goes downhill. Looking for a way to rectify not only her money troubles, but also pacify her broken heart, Summer decides to travel to a paradisical resort in Malaysia and sell the beach that she has a half share in. While the gorgeous surroundings impress her, Summer is keen to sell to a local company who want to exploit the beauty of the location. The only problem with her plan is that the other half of the beach’s ownership rights – previously owned by her cousin – are now in the possession of local resident ‘More More Tea’ (Richie Ren with an incredible character name). Summer’s proposal is flatly refused by More More Tea who is adamant that the beach he grew up should be enjoyed by everyone and not just an elite few. Calling on her unscrupulous business acumen, Summer decides to charm her new partner into selling his share; this, however, proves to be a gargantuan task as her target is nowhere near as naive as he pretends to be.

After watching the mediocre ‘Marry A Rich Man’ a mere few months ago, I approached ‘Summer Holiday’ with an obvious sense of caution. Though, on paper, this seemed to have all of the same ingredients as ‘Marry A Rich Man’ – and potentially all of the same faults – ‘Summer Holiday’ has a zestful atmosphere that makes it a whole different proposition. Make no mistake, it’s commercial film-making at its most obvious and calculated, but its execution is more accomplished than Vincent Kok’s heavy-handed effort.

A film as light and fluffy as this needs a romantic coupling that is believable, yet has a certain edge to it that makes even the slower scenes interesting. While Sammi Cheng and Richie Ren don’t set the screen ablaze with their chemistry, both are stars who play to their strengths here; Sammi is hard-nosed and cynical while Richie is care-free and acts as a suitable adversary/love-interest. Such a confident pairing helps to excuse a storyline that is needlessly stretched, especially near its conclusion where there is much pointless globe-trotting and introspection. A meaner edit would’ve been of great benefit to ‘Summer Holiday’ as director Jingle Ma seems to run out of steam shortly after the hour mark. Nevertheless, as cinematographer Ma shows his true vocation and makes sumptuous use of the wondrous setting.

While ‘Summer Holiday’ has no major weaknesses, it is a traditionally clichéd romantic comedy that doesn’t attempt to throw anything more challenging into the blend. However, such productions have their place and when made properly can still be appealing. ‘Summer Holiday’ is mostly such a film and is entertaining, while also serving as a picturesque alternative to the usual Hong Kong locales. Jingle Ma may still be some way off being as good a director as he is cinematographer, but he can be reasonably satisfied with his work here.