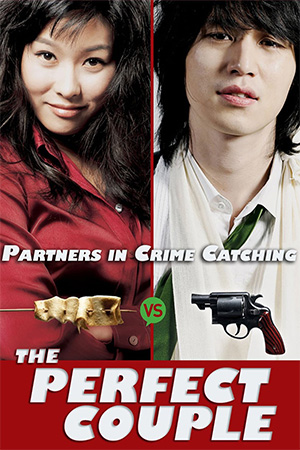 Detective Kang Jae Hyuk combines an icy determination with a strange phobia of pointed weapons, a mix that inevitably causes more problems than it solves. His kindred spirit would appear to be inept entertainment reporter Choi Soo Jin who is also a jinx on those around her. Yet their first meeting is less than ideal; Choi accidentally stabs Kang with a fish skewer as he chases a suspect through the city streets, causing him to collapse and wake up in eternal shame. When she spies a story and posts the incident on the Internet, Choi enrages her victim and their lives are forever entwined.

The law enforcer is on the trail of drug dealers operating from one of the city’s popular nightspots, but little does he realise that his petit nemesis is also keen to crack the case in order to move into serious journalism. Eventually their mutual hindrance turns into an alliance with the cop and reporter determined to put aside their differences to further their respective careers. A common attraction begins to develop which further complicates their mission to stop the kingpin and eventually puts them both in danger.

There’s something strangely soothing about Korean as a language that nullifies the expected agony of hearing a leading lady whining and whimpering for a full two hours. Perhaps its the charm of Hyun Young, a sublime comic actress whose mixture of doe-eyed innocence and banshee-like screeching works in a way that just shouldn’t. In most hands Choi Soo Jin would be a character equivalent of fingernails on a blackboard and her exaggerated mannerisms would be difficult to accommodate for a typically listless running time. Yet the effortless ability of Hyun Young is the major highlight of the film.

Hyun Young is the good news. Unfortunately her talents are forced into a story that fails to deliver on its early promise and eventually runs aground long before its very generous duration is over. What promises to be a sharp and witty rom-com with a splash of action and a dash of absurdity drags itself through countless episodic scenes that do very little to advance the story. Early sparks of humour and excitement get doused with the cold water of over-the-top humour and a narrative that is never given an attempt to gain momentum.

‘The Perfect Couple’ implies a Korean take on the old Hepburn/Tracy style screwball comedies along with modern Korean verve, but is found wanting and suffers from the needless over-bloating that seems to be such a curse to this genre. Moments of wacky promise are in stark contrast to the majority of the film, which gets stuck down a cul-de-sac while in no desperate rush to turn back again.