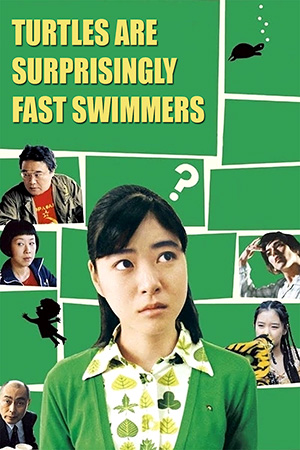 Suzume ‘Sparrow’ Katakura is a lonely housewife who discovers that she has gone from merely ordinary to nearly invisible. Buses pass her without stopping and everyday people barge her around as if she doesn’t exist. Even her husband, whose job has taken him overseas, only telephones her to find out whether or not she is feeding their pet turtle. Only best friend Kujaku values her, but she is so different from Suzume that even this relationship is not without its stresses.

‘Sparrow’ discovers a new life when she spots a discreetly placed advert recruiting spies for an unnamed organisation. Her plainness makes her the perfect spy and her tutors – a bizarre couple who have been ‘sleepers’ for well over a decade – teach her all of the strange quirks of their trade. These sleepers are encouraged to be so utterly mundane that there is no possibility of standing out, a virtue Suzume has, and await a mysterious call from their shadowy superiors. Meanwhile Suzuke meets the other oddball spies who inhabit the area while musing about the weird experiences of her past that have shaped her character.

Miki Satoshi’s film is as delightfully nutty as the title. A comedy that is at times head-scratchingly surreal, this is Japanese humour that will appeal to the Dadaists out there. Indeed Eastern comedy of this ilk reminds one of the strange paradox of British humour – where the very dry is mixed with moments that are completely off-the-wall. From Monty Python to The Mighty Boosh, the public here in the U.K. tend to be particularly drawn to something eccentric, a fact that may mean that ‘Turtles…’ will enjoy quite a cult reputation when it is released on dvd here.

The real difficulty with absurdism cinema is fashioning a whole narrative from its idiosyncracies, taking humour that may be adequate for a thirty minute programme and stretching it over an extra hour. ‘Turtles…’ does struggle to make its style as entertaining in the final half hour as it was in the first and the plot has clearly become rudderless by the end. The overall smile of bemusement that is gained through the initial part of the production does dissipate as the conclusion. At just under ninety minutes though, ‘Turtles…’ is still careful not to outstay its welcome and has enough zany style excuse it occasional lack of substance.

‘Turtles…’ absurd meanderings may not appeal to all audiences, but its packed so tightly with assorted nutcases and beautiful lunacy that this reviewer recommends it unreservedly. Where else can you see obsessive plumbers, dancing hairdressers, a ramen chef who excels in delivery incredibly bland noodles and songs about pink panda cushions in one place? And all of these elements are so well performed and executed in such a low-key manner that it exudes charm in gallons. Miki Satoshi has created something unforgettable, a comedy that is bonkers in that reassuring Japanese way. A cinematic experience not to be missed!