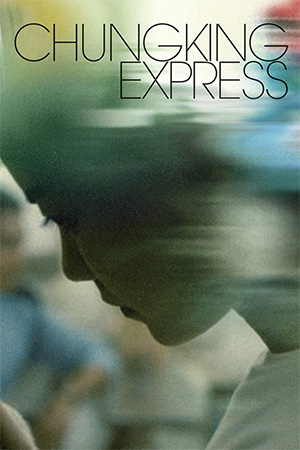 A  cult classic around the globe and one of Wong Kar Wai’s quickest productions, filmed during a 3 month break from another classic ‘Ashes of Time’, ‘Chungking Express’ is a fabulous piece of art house filmmaking that encapsulates true emotion and showcases some flawless performances from some of the East?s finest stars.

Essentially two separate stories loosely linked by the central location of a small take away; the majority of filming took place in and around the bustling Tsimshatsui and the now famous Chungking Mansions. The movie was originally supposed to cover 3 separate stories, but as filming commenced, the third was done away with eventually turning up in ‘Fallen Angels’ a year or so later. The two that remain are unique in style and tone, with the first being a rather bleak and definitely more artistically shot by Andrew Lau and follows the story of “223” (Takeshi Kaneshiro) a plain clothes cop pining for his ex-girlfriend. He eventually meets a mysterious blonde wigged girl (Brigitte Lin) and proceeds to quickly fall in love with her. With the blonde girl leaving as abruptly as she appeared, 223 meets a young girl, Ah Fei (Faye Wong) at his favourite take away. 6 Hours later, she falls in love with another man, cop 663 (Tony Leung) who also was left by his girlfriend. Ah Fei continually breaks into his apartment changing where his belongings live, and bringing in things of her own, which all goes by unnoticed by 663!

Simple stories beautifully told, and in the short time it takes for the films to reach its abstract conclusion, we begin to feel a genuine bond for the characters, especially in the 2nd episode where the fabulous choice of soundtrack only aids the pleasure of watching this marvellous film. Both episodes could just as easily fill a running time by themselves, and as such could be viewed independently. However, as a complete picture is where they deliver the greatest satisfaction. It is rare for such a film to hold one’s attention seemingly without trying, and as such it must not be missed by anyone who loves films of any genre.

This was to be Faye Wong’s only film appearance to date, although she had previously worked on a TVB series, and again with Kar Wai in a Motorola ad in 1997. Hopefully, this is not the last we see of her, as her glowing presence was one of the many great things to recommend this film. Do yourself a favour and buy it. Today.