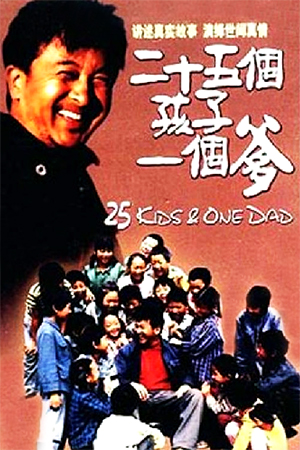 Zhao Guang is greeted as a local hero by his home village after making a modest amount of money from breeding chickens and finds himself thrust into the media spotlight. During one interview, Guang mentions that he is an orphan and is indebted to the villagers who raising him from an early age. These words are misunderstood though, and on his wedding day he is faced with twenty-five young children who have heard Guang’s words and are looking for adoption by him. Having to briefly postpone his wedding after his mother-in-law walks off in disgust, Guang decides to use the free time to find the families of the children and return them to their homes. However, he discovers that many of the children are orphans and a few live on the streets with little or no protection for them. Remembering his own upbringing, Guang decides to take responsibility for the children and asks the local villagers if they will afford the same help to these twenty-five youngsters as they did to him. Unfortunately Guang finds himself on his own after the villagers refuse to help, but the proud local refuses to let this set-back defeat his objectives. Instead, Guang converts his humble house into a home for the small army of children and provides for all of their needs. Naturally this challenging assignment is not without its problems and Guang often has to discipline his charges to gain their respect. Over time a bond does form though and the children look to Guang as they would a father.

Chinese cinema, as has often been mentioned on this site, has the remarkable ability to craft a gentle storyline into something far more substantial. ’25 Kids And A Dad’ is another film that manages to fit into this mould despite a few unsteady steps. Before concentrating on the praise, it’s important to understand that there are faults here. The most obvious of these is the inherent difficulty in making a film about twenty-five very different children – little time can ever be afforded to anyone one of them, therefore some plot strands are started and then dropped. Never is this more apparent than during a few brief scenes featuring the eldest child who is not given an adequate history and whose problems are quickly forgotten. As director, Huang Hong also falls foul of an unnecessary need to over-stylise even the most basic moments; pointless camera tricks are needlessly employed when a more straight-forward touch is required.

Even though ’25 Kids And A Dad’ is not the apex of Chinese film-making, it once again shows numerous qualities. Some may argue that the basic premise, along with the use of a very magnetic troupe of child actors, is obvious in its intentions to pull the heart-strings. This may be true, but it doesn’t negate the quality of the production or its effective concentration on very genuine human emotions. It’s also a more accessible production than some of the better known Chinese films as it doesn’t slip into political rhetoric or social criticism; there may be subtle proddings towards the importance of the state, but this isn’t the main thrust of the film. Director Huang Hong instead conjures up a few powerful moments that even the most cynical viewer will be touched by, utilising his excellent cast and some exceptional village scenery. Enough warmth is present within this film to make viewing a rewarding experience.