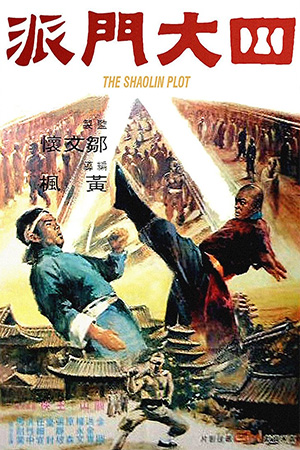 Evil Chinese dictator spends his time abusing his considerable power and adding further volumes to his extensive kung-fu library. After stealing the acclaimed Wu Tang manual of martial excellence, Dagalen turns his attentions to the final prize; the Shaolin fighting book. Knowing the power of the owners is simply too strong, Dagalen decides to infiltrate Shaolin temple and gaining the book through deception. Meanwhile the son of one of Dagalen’s many victims begins to trace the activities of the cruel villain and finds his way to the home of a blind monk. There he learns advanced fighting techniques to counter his foe and uncover the Shaolin plot. When this young fighter discovers Dagalen’s secretive threat, the obsessed ruler takes the chief abbot hostage and flees to his palace. In a final attempt to resolve the situation and rescue their superior, Shaolin send their best fighters alongside their young ally to Dagalen’s retreat.

A strong cast combine to lift this well-made kung-fu film up a notch and make it a recommended evening’s viewing. Director Huang Feng is very much of the old-school film-making that dominated the 70’s, but this is certainly no bad thing. Feng’s straight-forward approach means that the plot is given time to develop and there is emphasis on the all important action. Avid viewers may also be pleasantly surprised by the appearance of James Tien as hero, a part he manages with moderate success. ‘The Shaolin Plot’ would normally gain a strong three star rating, but here it’s given an extra star due to Casanova Wong. Wong was to shoot to stardom with ‘Warriors Two’ and here he shows exactly what audiences could expect. In his brief appearance at the conclusion Wong sets the screen alight with a stunning array of kicking that nearly steal the entire film. For this reason – and the assurance that this is a good film – ‘The Shaolin Plot’ is solid entertainment.