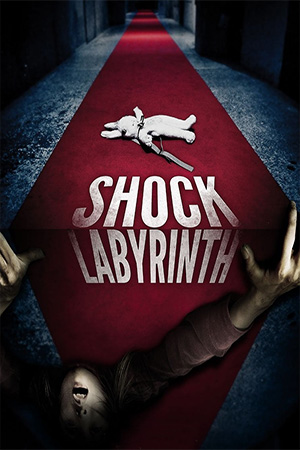 Takashi Shimizu, the man behind the groundbreaking ‘Ju-on’ series and it’s American remakes ‘The Grudge 1 & 2’, turns his horror hand to the world of 3D for a somewhat watered down but nonetheless entertaining horror flick, ‘The Shock Labyrinth’. It doesn’t come close to reaching the creepy heights of ‘Ju-on’ but it’s a moderately spooky horror flick with some unnecessary but occasionally groovy 3D additions.

A group of friends are reunited many years later after a traumatic incident that took place in a haunted house attraction at a local theme park. When the group was young, one of them disappeared inside the haunted attraction. Some ten or so years later when the group reunite the missing member suddenly reappears. Understandably a little disturbed by their friend’s sudden reappearance the group attempt to accept her back into their lives despite their apprehension. However, the girl who has suddenly reappeared faints and seems to go into some kind of comatose state. The group rush her to a hospital with inexplicably seems to be deserted. Soon the group realise they are stuck back in the haunted house as they search for their once again vanished friend, re-living the memories of what really happened that fateful night when they were young.

Apparently based on a theme park attraction in Japan called ‘The Haunted Hospital’, ‘The Shock Labyrinth’ is for most of its running time set in the creepy confines of the an eerily deserted hospital. This goes a long way to creating an unsettling atmosphere that Shimizu milks for all its worth with long deserted corridors and dark enshrouded corners where we can’t quite see what is going on. It’s a spooky setting that is peopled with young adults a little more rounded  than your usual run-of-the-mill horror flick teenagers. Ok, so the flick is no deep psychological examination of troubled youngsters but the characters are welcomingly likeable and feel like real people with real relationships rather than generic stereotypes. Refreshingly no character is too annoying and the viewer actually cares what happens to them during their scary plight.

Working with what appears to be a limited budget, Shimizu hides any constraints with enough off-the-wall imagery and creepy tension to overcome any shortcomings. The 3D is pretty good with many objects and such floating and being pointed towards the camera. It’s pretty unnecessary, as 3D often is, and the film is still just as spooky without the bonus three dimensions, but it adds a certain grooviness to proceedings if you are into all things 3D. However, this is a much more muted effort horror wise than the likes of ‘Ju-on’. Seemingly marketed more for a younger audience, ‘The Shock Labyrinth’ isn’t likely to get under the skin like ‘Ju-on’ or other Japanese spook fests such as ‘Ringu’ and ‘Pulse’ did. Pretty much bloodless and the jump factor toned down, ‘The Shock Labyrinth’ will no doubt disappoint hardcore horror fans or those looking for the next truly disturbing J-horror flick.

Yet, the flick is still an entertaining ghost story that despite being a little tame is still a worthy effort from one of the masters of eastern horror.