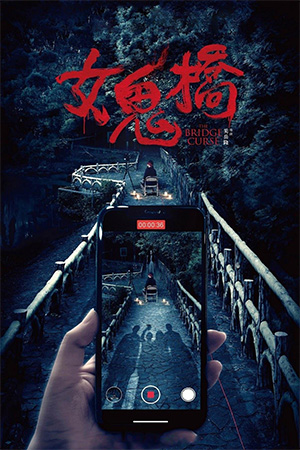 On the surface ‘The Bridge Curse’ is a fairly derivative J-horror style shocker complete with long haired ghosts, phantoms twisting their bodies in freaky ways, and ghouls scuttling along the ground in an attempt to kill a group of know-it-all youngsters. And in many ways ‘The Bridge Curse’ is just this: derivative ghostly shenanigans you’ve seen countless times before. However, thanks to a novel set-up, some impressive tension and a cast of youngsters that aren’t as annoying as they first appear, ‘The Bridge Curse’ provides enough jolts to warrant a watch.

A journalist is determined to get off the two-bit beat of covering “silly news” by uncovering the truth behind the freak disappearance of a group of college students some years prior. Said students set out to film and prove the legend of the female ghost bridge: a bridge where a jilted lover was killed and supposedly haunts the crossing looking for fresh victims to take revenge on. But as the journalist digs deeper, she realises there may be some truth to the supernatural legends surrounding the bridge.

One of the main factors that saves ‘The Bridge Curse’ from being too run-of-the-mill is its novel structure. Cutting between the journalist investigating the incident and the footage of the students, several years earlier, we the viewer slowly get to see what happened to the youngsters all the while as the journalist uncovers the secrets of the bridge and realises (too late) what she has gotten herself into. The film switches between a more cinematic approach (mainly the journalist’s story) and a found footage approach (the college students’ story) which is a little jarring at first. However, once it finds its groove, it separates the timelines well and means horror fans get both a traditional and a found footage horror film at the same time.

The scares also work best in the found footage segment as the more successful frights are the glimpses of something sinister watching in the background or just on the edge of the frame, meaning tension is well mounted. In fact, the tension is almost too good, the build-up too successful that the eventual payoffs don’t live up to what has come before. There’s unfortunately too much reliance on J-horror tropes even the most causal viewer of the genre will be common with (the aforementioned long-haired, scuttling ghouls!) that despite the skill shown in building dread the film can feel somewhat seen-it-all-before.

However, thanks to a reliance on tension rather than in-your-face gore, some skilful photography and a young cast that while fodder for the curse aren’t as annoying as the genre usually features, means ‘The Bridge Curse’ is an entertaining 85-minute horror ride. There could have been a bit more narrative set around the investigating journalist (as she’s still more interesting than the college kids!) but with an intriguing urban myth as it’s crux and a couple of nifty twists, ‘The Bridge Curse’ is fun long-haired-ghost-horror while it lasts.