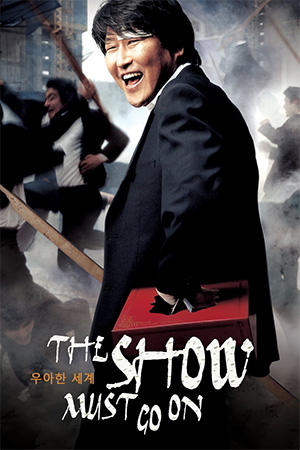 Song Kang-Ho, an actor whose very presence in a film makes that production worth watching, continues to search for the unusual and challenging. He’s often been the indolent loser or the slightly shady anti-hero, but ‘The Show Must Go On’ is the fusion of both of these archetypes, the blending of which elevates the film from an ordinary genre piece to something that bit more enlightening.

Kang In-goo faces many of the same challenges that fathers of teenage girls around the world face, namely nascent rebellion, constant arguments and mood swings on the part of his offspring. With her education floundering as a result, Kang and hislong-suffering wife have to discuss her progress with her worried tutors and find out what is troubling their monosyllabic daughter. What certainly does not help the situation is Kang’s unusual profession: a mid-level gangster with severe danger confronting him every night.

As his wife continues to beg him to go straight and his daughter is further alienated by his unpredictable lifestyle, Kang vows to finally draw a line under his criminal activities. His attempt at normality involves buying a new home for his family and asking the organisation’s kingpin for the chance to be on the right side of the law. There are of course a number of obstacles to face, namely assassination attempts from rival gangsters and the seething jealousy shown towards him by his boss’ ambitious son. Eventually Kang’s desperation to leave creates further problems and soon he has nowhere to turn to.

‘The Show Must Go On’ is an apt title for this droll comedy thriller that deconstructs the usual stereotypes surrounding the crime genre. Han Jae-rim starts as he means to go on, opening with a scene of his lead character forcing a business associate to sign his construction over to the mob, then going home to a very ordinary existence and having to attend his daughter’s parents’ evening meeting. That latter event proves to be a more stressful situation than the bloody machinations of the Korean mafia and his inability to cope with the standard pressures all parents face is effectively realised. His relationship with his brother – member of a rival gang – distils what this oddball drama into a few key scenes; the two fight intensely, then share a meal at their favourite noodle joint and discuss their schoolboy crushes. This is a refreshing departure from the usual swaggering machismo that accompanies similar stories.

As the narrative takes a move towards a tense, unpredictable denouement, Song Kang-Ho rises to the challenge and once again shows why so many audiences find his screen presence utterly hypnotic. Always dishevelled, rarely organised, yet devoted to his family despite his dark double-life, Song imbues the character with enough genuine humanity to make all of these ‘quirks’ easier to digest. Sympathy ultimately lies with his long-suffering wife, but his intentions are difficult to ignore and his dilemmas eventually riveting. The message of the film also packs an emotional punch with the sharp-suited, well-armed gangsters pathetic when away from the comfort of their tribe. The real achievement is not theirs – it is the moments when Kang In-goo finally becomes a real father and an affectionate husband.

Han Jae-rim’s sophomore effort would really have benefited from having fifteen minutes or so shaved off its running time though. However skilfully the story is told and despite the brilliance of the actors involved, the whole production needs a more confident and less muddled ending. Every moment that tries to close the film ends spiralling into another scene and loose ends are left flapping in the wind. That said, ‘The Show Must Go On’ is still packed with bone-dry humour juxtaposed with moments of gripping tension, a feat that should not be underestimated.