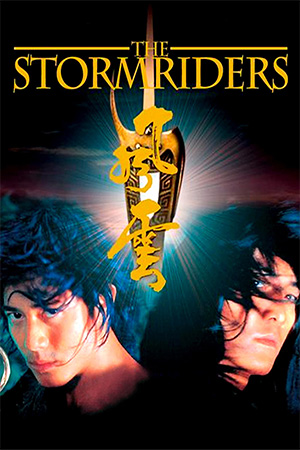 Based on the best-selling comic book of the same name, ‘The Storm Riders’ coupled a strong cast of Hong Kong stars with special effects hitherto unseen in local cinema. The result proved to be the year’s biggest grossing local film, even brushing aside strong foreign competition in its bid for box-office dollars. Therefore another landmark in Hong Kong cinema was created and numerous attempts to plunder its success continue to this day.

Conquer (Chiba) hopes to rule the turbulent martial world he observes from his formidable kingdom. The opportunity for this arises when Conquer is told about an obscure prophecy which sees him attain power if he adopts two children – Wind and Cloud – and teaches them his skills. However, there is a warning alongside this and Conquer is told that, even though the two children will bring him great power when they grow up, they will eventually destroy him. With typical arrogance, Conquer listens only to the first part of this prophecy and sends out his minions to capture the two boys, killing the real fathers in the process. As the years pass and the powerful skills are taught to Wind and Cloud, the first part of the prophecy begins to take place and no-one can stand in Conquer’s way. He hasn’t, though, forgotten the second part of what he was told and now, with full power at his command, Conquer plans to use his adopted sons on two more missions and then have them killed. The unity that Wind and Cloud need for revenge is somewhat difficult to achieve as both are in love with the beautiful, yet flirtatious daughter of Conquer (Yang) and the obvious resentment between the two only increases as time goes on. The time for teamwork arrives when the two survive their respective assassination attempts and Wind discovers who really killed his father; now in tried and tested fashion, only by overcoming their animosity towards one another can Wind and Cloud combine and gain revenge on the tyrannical Conquer.

As was earlier stated, ‘The Storm Riders’ is certainly a landmark in Hong Kong film-making with its emphasis on western special effects in a uniquely eastern project. This doesn’t mean it’s a great film though; there are certainly weaknesses that are very apparent on first viewing and are further repeated as progressive viewings are taken in. The unpredictable pace of the film is the first weakness that clearly presents itself with Lau seemingly unable to combine moments of action with those of narrative development. This problem as often afflicted Lau’s work, but in a two hour film like ‘The Storm Riders’ this is more apparent than ever. Coupled with this is the over-abundance of characters which are thrown into the story, but not properly expounded upon; some deserve films on their own and so seeing them make a rudimentary ten minute appearance and then disappear from the film is a confusing experience. Had Lau concentrated on a few of the important characters and not tried to drag in every aspect of the long-running comic book, he may well have avoided this hurdle. Instead, the viewer is left to puzzle things out.

These criticisms do not condemn ‘The Storm Riders’ as a waste of viewing time though as there are elements that are to the film’s credit. The huge cast will please many Hong Kong film fans with appearances by lots of well-known faces and respected actors. In the acting department, Ekin Cheng has the slight edge over Aaron Kwok with this mainly due to his character; Kwok as Cloud is merely asked to brood throughout the film and this quickly loses the audience sympathy. Cheng as Wind is at least asked to inject a few emotions into his character and – though he’s often the butt of reviewers’ jokes – he pulls them off fairly well. The real reason to watch the film is the eye-candy which at least shows Hong Kong film-makers trying to beat Hollywood at their own game. The effects are excellent and fully earn the viewer’s attention, particularly in the three-on-one finale.

‘The Storm Riders’ is a film that all Hong Kong film fans will want to watch for its reputation. Whether or not it’ll stay in the viewer’s mind much longer after the final credits role is a different matter.