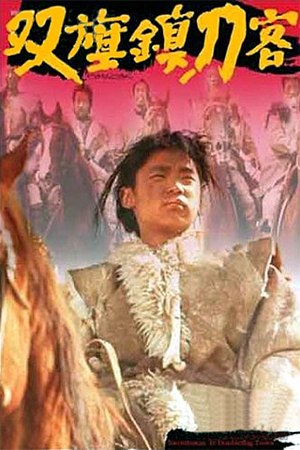 Out of the harsh deserts of China emerges thirteen year old Haige who is make the journey to the isolated Double Flag town. On the way he meets grumpy knight errant ‘Desert Eagle’ who promises to help the youngster in the future after he is given half of the sympathetic Haige’s money. On arriving in the dusty outpost, Haige reveals that he is looking for the daughter of a local man who is was betrothed to when he was a child. The future father-in-law is actually the hobbling owner of the inn, frequented by the assorted troublemakers that drift in and out of town. Haige is not intially welcomed and his intended young wife his equally dismissive of him, even when the teenager agrees to help out in the inn. Trouble is brewing though as famed outlaw ‘Lethal Swordsman’ and his gritty gang of desperadoes begin to exert their influence on the town. Little does the inn owner know that his potential son-in-law has accomplished sword skills hidden beneath his callow exterior and it is these talents that will bring all of the simmering tension to a head.

It way be corny to call this a ‘Noodle Western’, but that’s exactly what He Ping’s swordplay film is. Borrowing heavily from the iconography of the Spaghetti Western, utilising the same haunting atmosphere and a harsh landscape that envelops the protagonists, this is as close to Sergio Leone et al as Chinese cinema has ever got. And, perhaps surprisingly, it works very well. From the opening shots of figures appearing in the dust clouds to ample use of atmospheric diegetic sounds, everything nods reverently in the direction of the inspirations behind them. The marvellous opening to ‘Once Upon A Time In The West’ is alluded to by He Ping as he gradually puts on layer upon layer of style to compliment the standard narrative.

There is a slick marriage between the execution of the story and the swift, chanbara-style action that peppers the film. There are none of the grand spectacles we’ve all become accustomed to; there is an admirably stripped down look to the whole production. No wirework, no flowing robes swishing with each sword strike, just quick-draw confrontations that again recall Italian Westerns and Japanese samurai flicks. Such simplicity of action requires a mood to build the tension of each showdown and He Ping knows exactly how to achieve this supremely.

The unfamiliar aspects of a very young hero with an even younger love interest mix rather well with the obvious influences and create a swordplay film quite unique within Eastern cinema. From the opening frames to the denouement, this is a production that sucks you into its strange universe, style dripping out of every shot. The victory of this style over substance may mean it isn’t as accessible as other genre efforts, but it is gripping enough to recommend to anyone.