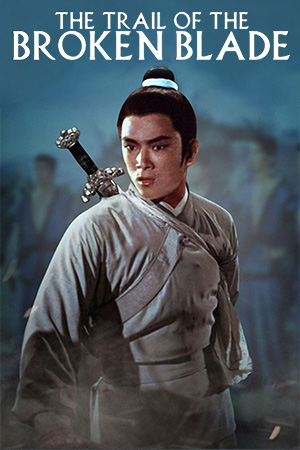 After Li Yueh’s (Wang Yu) father is wrongly executed due to the corruption of one particular official, the righteous swordsman takes the law into his own hands and kills the man responsible. By doing this, Li becomes public enemy number one and must therefore flees his home town and changes his identity. A little while later, Li’s fiancé Liu Xian is saved from an attack by the dreaded Flying Fish gang when noble sword fighter Fung Jun-Zhao intervenes and saves her from a fate worse than death. Liu’s father asks the hero to stay and teach his daughter the next level of sword fighting; though grateful to Fung, Liu makes it clear that she only loves Li Yueh and he has sadly disappeared. Although Fung finds himself attracted to his beautiful new friend, he puts his feelings to one side and vows to find her lost love to reunite them. During his travels, Fung stops in a small town where he befriends a local stable boy who, unbeknownst to him, is actually Li Yueh, and the two soon become close friends. Li nevertheless refuses to reveal his true identity, even though his secret admirer, Hsiao (Chiao Chiao), implores him to do so. The revelation occurs when the vengeance-seeking Flying Fish gang send their men to track down Fung and kill him, an attack that sees Li Yueh step in to rescue his friend and is therefore forced to disclose the truth. The Flying Fish gang are not finished, however, and Li Yueh decides that the only way to solve his friend’s situation is to destroy them himself.

Wang Yu was never the greatest thespian under the Shaw Brothers’ banner; though certainly a skilled performer, he lacked the range of Ti Lung or Ku Feng. Nonetheless he pulls of many of his roles with aplomb and his performance as the self-sacrificing hero Li Yueh is an excellent showcase of this. Wang Yu deals with the few complexities of his character very well and fills out this pivotal role of the film. ‘The Trail Of The Broken Blade’ is a swordplay film that, for the most part, impresses with its solid spine of Chang Cheh’s themes of loyalty and friendship, though occasionally the archaic aspects do detract.

As was briefly mentioned, the production benefits from its director’s strong code and the performances of most of the cast. The aforementioned Wang Yu is a good leading man while Kiu Chong is excellent as the devoted friend Fung Jun-Zhao and Chiao-Chiao takes her smaller role as Li’s secret admirer and lifts it out of the background. The real surprise of the film is Paul Wei’s contribution to the cast; he always had the ability to act, but I always tend to associate his name with the slimey, weedy characters of the Bruce Lee films. Wei is a commanding presence as the inn-keeper ‘No Fear’ – a man whose name speaks for itself – and, although it is a supporting role, he steals many of the scenes he’s in.

While Chang Cheh’s stamp is obvious within the framework of this work, it falters at times. The pace of the first twenty minutes is too uneven to be involving, though the pace really picks up when Liu Yueh enters the film once again. This difficult opening period of the film is quickly forgotten when the main narrative starts to take effect, but it still shows evidence of where improvements could have been made. Some of the swordplay action also suffers from a very dated look with a few instances of poorly used wirework not helping matters. Although the choreography is over thirty five years old – something that should be taken into account – the similarly aged ‘The Magnificent Trio’ comes across far more convincingly. All of these weaknesses are present, but they don’t stop the film from having the tragic power we’ve come to expect from Chang Cheh’s hand.

In conclusion, ‘The Trail Of The Broken Blade’ has more positives than negatives. It could be accused of being archaic in construction, using very familiar character-types (to the modern viewer) and plot-twists. However, Chang Cheh makes the overall drama strong enough to dispel any thoughts about these moments of difficulty. A four-star movie that, due to its heavy-handed closing shots, loses half a star; the same idea was used with much more sophistication at the end of ‘Anonymous Heroes’.