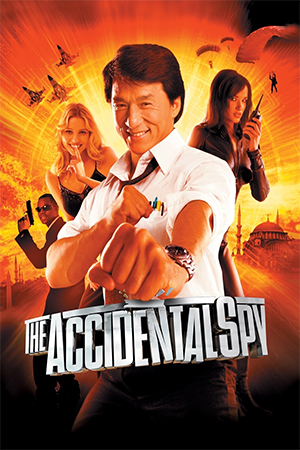 This movie breaks new ground for Jackie, being a Hong Kong production which throws away almost all of what JC fans have been used to for the past twenty years and has gone completely “Hollywood”. Since ‘Who Am I?’ in 1998, and his two previous American efforts, it has been clear that Jackie has been aiming away from the Jade screen audience, instead trying to catch the Western glory he has been endlessly striving for, and with ‘The Accidental Spy’ he has come close to something which might work. He has recently mentioned how he would rather do one film for both audiences, than do one for each, and I personally hope this will not be the case, as movies like this, although interesting, are not what most of us love about Jackie Chan.

Firstly, Hong Kong scriptwriters and directors generally fall behind Hollywood in terms of simple storytelling and editing, which is evident here. Usually, Hong Kong filmmakers make up for this with flair and inventiveness, which sadly, here, is not evident. There are no extended fight sequences, while the ones that do appear are slow and ordinary, with the only true piece of ‘Jackie Chan’ coming in a naked chase through a market square in Turkey, which is extremely fun, and well crafted. The end stunt is the next step up from that in ‘Mr Nice Guy’. Namely, pure destruction and adrenaline, with little of Jackie’s trademark ingenuity.

Essentially what makes this different to most JC flicks, even the American ones, is the moody character, and emphasis over story rather than action. Usually, we have a happy go lucky kind of guy involved in a story which is more interested in creating opportunities for Jackie to show off his fast punches and incredible dexterity, which is also what I would like to see.

On the positive side, and what saves this movie from a lower score, is good direction making effective use of colours and scenery, enhancing what is an interesting story, with good twists allowing Jackie to play a more mature role than usual. Also, there are a few exciting stunts such as the aforementioned market chase, and well-directed vehicle set pieces crafted by the car stunt technician from ‘Ronin’. The movie itself suffers a little from the usual embarrassing Westerners displaying their ‘Who am I?’ school of acting, as well as Jackie’s evidently deteriorating physical condition.

If you are a big Chan fan, then you will undoubtedly want to own this movie, as will anyone who wants more than just action. If, however, you are the average action/martial arts fanatic, then this will leave you feeling a little short changed.