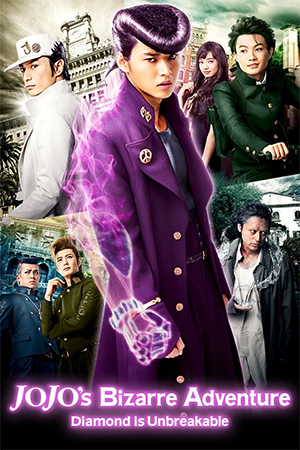 ‘Diamond is Unbreakable’ is the 4th part in Hirohiko Araki’s ‘JoJo’s Bizarre Adventure’ manga, making it a somewhat odd choice for the first live-action movie. While there is a good case to be made that each part provides its own separate story, there are still a number of key characters and concepts introduced prior to this point that are important to the overall plot. That being said, the fact that this particular part contains a few darker and more fantastical elements (specifically “Stands”), it probably seemed like a very appealing opener for a director like Takashi Miike. But, is Miike capable of making this particular diamond sparkle?

Josuke Higashikata (Kento Yamazaki) is a quiet but popular kid who possesses a secret power known as a Stand. With this power, he is able to summon a being known as Crazy Diamond who is capable of restoring or fixing broken objects or animals. When a stranger by the name of Jotaro comes to town, he confronts Josuke with the news that they are related and both possess similar powers. Despite his scepticism, Josuke is intrigued and soon learns that there is a murderer in town using his Stand power for evil. Now Josuke and his friends must unite to try and solve the mystery before anyone else gets hurt.

Much like a lot of live-action manga/comic adaptations, the first hurdle to overcome for a movie like ‘Diamond is Unbreakable’ is the sheer scope of the story. With a number of characters and subplots introduced over multiple chapters, it’s hard to condense all of that material down into a single movie (or in this case, an intended two movies). In this department, ‘Diamond Is Unbreakable’ certainly does its best to remain faithful to the source. The opening Angelo arc in particular is very well handled, with most of the same notes being recreated albeit with a slightly more eerie and very Miike-esque tone. Similarly, the overall timeline feels fairly consistent with the first few arcs and most of the major beats are pretty much spot on. Perhaps you could argue that characters such as Yukako Yamagishi and Kira do feel a little rushed into the mix, but on the whole I didn’t really have any huge problems with the way the film is structured.

When it comes to the characters however, this is probably where the first real cracks start to appear. Although most of the actors certainly look the part, perhaps with the exception of Koishi, the majority of the them feel like they are just attempting to do a bad impersonation of their comic book counterparts. Kento Yamazaki as Josuke is particularly guilty of this, spending most of the movie striking poses and raising an eyebrow, to the point where I honestly found his character incredibly distracting. Obviously I appreciate that Josuke was never exactly overflowing with depth, but he was at least a cool and happy-go-lucky kid who had his heart in the right place. Moving down the list, Yusuke Iseya feels far too old and skinny to be playing Jotaro while Mackenyu as Okuyasu is just about passable although his part is fairly limited. As for Ryunosuke Kamiki, he is easily the weakest of them all, but it’s not really the actor’s fault. He just seems utterly wrong to be playing what is essentially a small child and he comes across as more of a cliched nerd who gets mixed up in a strange mess.

Visually, the film also proves to be equally divisive even though this is probably the area in which it also excels. With Miike at the helm, the film opts for a much darker and more brooding colour palette in comparison to the anime, and there were certainly moments that I saw flashes of films like ‘Ichi The Killer’ and ‘Audition’. This approach certainly works for the opening segment, as Angelo’s arc is surprisingly violent when you stop and think about it and the film chooses to enhance the mood to the point where the first third feels more like a murder mystery. However, once this ends and we move forward into some of the more wacky aspects of the plot, it almost starts to feel like the aesthetics are far too dull. The constant use of black quickly becomes tiresome and you find yourself crying out for the CG to kick in and give your eyeballs a break.

As for the action sequences, these should really be the film’s pièce de résistance as they are an extremely important aspect of the source. Sadly though, they wind up feeling just as hit and miss as the majority of the other assets. This is, in part, due to the live-action representation of the Stand ability as it is arguably one of the most difficult elements to recreate. ‘Diamond is Unbreakable’ opts to achieve this via the CG route, with the Stands appearing as ghost-like figures who emerge out of the fighter’s body. In theory this probably seemed like a good idea but the fact that they are oddly transparent often makes them difficult to see and the lack of substance means that they never really feel quite as powerful as they should. This is not to say there aren’t still a few standout moments though, with the fight against Angelo’s slippery Stand and the finale featuring Keicho Nijimura’s unique ability emerging as the most entertaining.

‘JoJo’s Bizarre Adventure: Diamond Is Unbreakable – Chapter 1’ is a valiant attempt at bringing a very visually unique and often “bizarre” manga/anime to the big screen. Unfortunately, despite doing some things right in terms of the look and feel of the franchise, it never quite seems to re-capture the atmosphere or the magical abilities to the point where they truly captivate. Still, I’d recommend fans check it out if for no other reason than to see for themselves what works and what doesn’t. As for newcomers, I’m pretty sure it won’t quite click and they’ll probably be left with far more questions than answers.

Note: It appears that the intended sequel has now been cancelled so it’s worth noting that the film ends with a number of unresolved plot points.