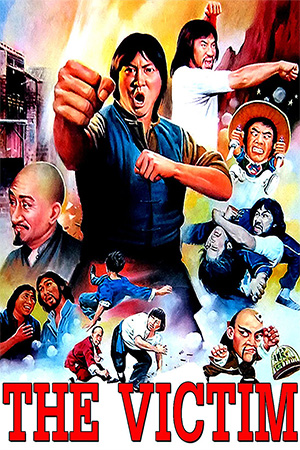 The interesting storyline follows a hapless drifter (Sammo) who travels around looking for someone who is good enough to be his master. His various encounters with the fighters he meets leaves this mission unfinished and the likely candidates clearly lacking. The devoted student finally meets an accomplished master (Leung Kar Yan) who proves himself worthy of this unusual ‘privilege’. The unimpressed master has no intention of taking Sammo has his disciple though and therefore concentrates his time on trying to rid himself of this new friend. His attitude changes when this young obsessive becomes embroiled in the various family intrigues that the master had hoped to keep hidden. To this end, Sammo learns how his reluctant teacher has become the victim of a vendetta by his jealous brother and he has been on the run ever since. Recent incidents mean that the running must finally end and both fighters must finally face their on-coming enemy’s hordes.

‘The Victim’ is a fine mixture of action comedy and even drama – three elements that director Sammo Hung juggles with masterful dexterity. This aforementioned action is supremely designed with Leung Kar Yan given one of his very finest opportunities to shine. In battles where he is hopelessly outnumbered or against supervillains Wilson Tong and Chang Yi, Leung Kar Yan is every bit the powerful screen hero that his reputation implies. His dramatic performance increases with intensity as the storyline progresses; these elements alone make the film a firm favourite among fans and critics alike. It’s sometimes forgotten that the kung-fu genre contained some good actors as well as impressive physical performers and here Leung Kar Yan gives strong proof of this. ‘The Victim’ does falter at times though as the change from comedy to drama can appear more sudden than usual. There is also the fact that the closing twists happen in such succession that they tend to undermine each other. Nonetheless, the film should be appreciated as a good example of the cinematic value of a captivating storyline, worthy acting and excellent fight action.