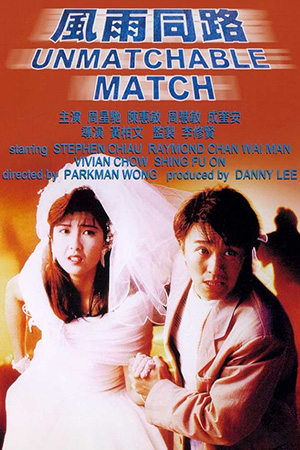 It’s fairly well-documented that Stephen Chow’s career wasn’t always rooted in the comedy genre. Before his early comic box-office successes with ‘All For The Winner’ and ‘Fight Back To School’, the Canto-star was taken under the wing by established actor Danny Lee and given a few serious roles to test his mettle. Although some of these performances did make the critics sit up and take notice, Lee quickly discovered that Chow’s ability was in a very different area of cinema. ‘The Unmatchable Match’ is one of the straight-forward action thrillers made prior to the landmark ‘All For The Winner’ and it provides Chow with a serious and meaty role.

When dangerous criminal ‘Big Mad’ (Shing Fui-On) pulls off a considerable jewellery robbery in the heart of the city, his first aim is to find an underworld dealer who can sell the goods. He picks Lee (Chan) for this task, but Big Mad’s violent temper means that the two cannot get on and the animosity is obvious. Big Mad sees Lee as a betrayer and so decides to wipe out this one-time ally; Lee is innocent, however, and decides to go on the run with the proceeds from the robbery. With Lee attempting to disappear out of Hong Kong and escape the situation, the police assign undercover cop Long (Chow) to quickly befriend him and find out more about the event. Thrown together due to circumstance, the two initially fail to get on, but soon a bond is formed that sees them through a few hair-raising moments. As Long gets to know more about Lee and his innocence in the situation, he feels the pressures of his double-life increase and his loyalties divided. The truth is in danger of forcing its way out though as Big Mad is closing in on the pair, intent on getting hold of his ill-gotten gains and avenging his loss of face.

An over-used plot is recycled once more with the predictable ambiguity of friendship once more taking place. The twists and turns have also been seen in a whole series of other films about undercover cops and so the film offers few surprises. What does make the film a slightly above-average one is the two worthy performances of Chow and notably Chan Wai-Man; both leads are more than adequate in roles which were in danger of becoming over-familiar. The developing relationship between cop and crook is handled well by director Parkman Wong who allows the film to move along briskly. ‘The Unmatchable Match’ is a good example of an unremarkable synopsis getting better as the film takes hold. For a pre-comedy Chow vehicle, this is nothing for the Cantonese superstar to be ashamed of.