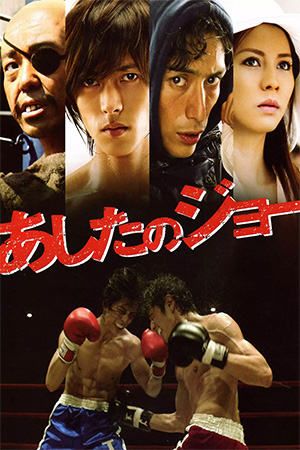 Growing up on the city streets of an emerging Japan of the 60s, Joe Yabuki relies on his quick wits to get by. His skill with his fists gets Yabuki into constant scrapes, most significantly a run-in with local thugs who are bullying inebriated ex-boxer Danpei. He soundly beats the aggressors, but is taken to a youth detention centre where his moody reputation precedes him.

Yabuki fends off the numerous other inmates yet finds an immovable object in the shape of incarcerated champion boxer Toru Rikiishi. When the young brawler is released he turns professional and is trained by wily old Danpei; under his tutelage Joe rises through the ranks, swatting aside numerous opponents with his devastating cross counter punch. It’s only matter of time before he earns a title shot and inevitably it is against Toru Rikiishi.

Beloved Japanese comic strip ‘Ashita no Joe’ is brought to the screen by Fumihiko Sori, a director used to tackling national institutions with a modern twist after 2008’s ‘Ichi’. Whether or not it has been worth the wait may depend on the viewer’s appreciation of the source material; as someone unfamiliar with the manga that inspired it, I can only judge it from a cinematic viewpoint which may preclude me from being fully immersed in the world of Joe Yabuki.

‘Tomorrow’s Joe’ has the classic underdog sports movie set-up: talented, but raw young hero is turned from zero into hero with the help of an eccentric coach. Some will immediately think of ‘Rocky’ though it predates the Stallone film by a few years. Yet unlike that classic boxing film (indeed classic drama without need to mention sub-genre), ‘Tomorrow’s Joe’ doesn’t allow for the same emotional investment in its characters.

What people forget about ‘Rocky’ – or choose to ignore given the subsequent snobbery shown towards its Oscar success – is that it was an earthy drama that fashioned a realistic world with strong characterisation. The viewer isn’t just waiting for the next fight; they are emotionally involved in the narrative and the people that inhabit it. ‘Tomorrow’s Joe’ cannot match that gravitas and often doesn’t seem to try, favouring a direct transfer from comic strip to screen without any of the depth that Manga work can often deliver.

JPop idol Yamashita is a photogenic hero, but is asked to do little other than brood and pout, both of which he accomplishes well though this doesn’t do much to endear this constantly moping protagonist to this reviewer. The fights are polished and recall their Manga roots, the period detail – helped by CGI recreations of a rebuilt, post-war Japan – successfully evocative. This means that ‘Tomorrow’s Joe’ is undoubtedly entertaining for two hours or so, just don’t expect it to resonate beyond the duration.