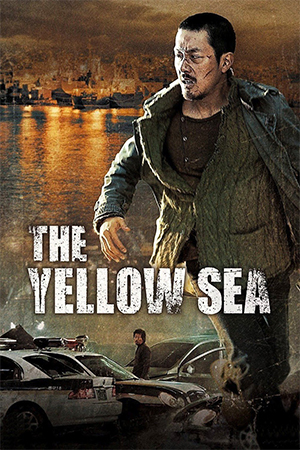 The stars and director of the really rather awesome ‘The Chaser’ reunite for director Na Hong-jin’s follow up ‘The Yellow Sea’. While not quite as strong a film as ‘The Chaser’, ‘The Yellow Sea’ is more than a worthy follow up and despite it’s hard hitting nature and unrelenting need to wallow in the underbelly of society, is a well-constructed and ferocious thriller. Ha Jeong-Woo and Kim Yun-Seok played villain and (anti) hero respectively in ‘The Chaser’ while here they switch roles with Ha Jeong-Woo as the put upon hero and Kim Yun-Seok as the truly ruthless villain. Jeong-Woo is Gu-nam, a down on his luck cab driver living in Yanji City: a region that borders North Korea, China and Russia. In debt up to his eyeballs thanks to his gambling habit and his wife disappearing to South Korea leaving him with a huge visa bill to pay for, Gu-nam reluctantly takes an offer from hit-man Myun (Yun-Seok) to travel to Seoul to kill a man Myun has been contracted to terminate. Seduced by the big payday this opportunity offers, Gu-nam traverses the dangerous Yellow Sea to Seoul and once there, well, things don’t exactly go to plan. Seen as an outcast, desperate to locate his missing wife and with only 10 days to kill the target things go from bad to worse for poor old Gu-nam. Then Myun shows up in Seoul and all hell, spectacularly, breaks loose.

Clocking in at a good two and half hours or so, and while it doesn’t feature sweeping vistas or armies of thousands of extras engaging in large scale combat, ‘The Yellow Sea’ is well and truly a epic. A relentless journey through the low rung end of society the film is an endurance for both us the viewer and the protagonist Gu-nam as society’s scum do their worse to cover up a killing and make sure Gu-nam does not get away and back home to Yanji. First and foremost a thriller, with a large action quota, Na Hong-jin’s film also offers a look at the discrimination the people from Gu-nam’s area often endure and how those living in the lower ranks of society are forced to do things they would never normally think of in order to get by. Now Gu-nam is no saint, his gambling habit part of the reason he has ended up in the mess he is in, but this makes him all the more susceptible to be taken advantage of by those looking for a fall guy. Gu-nam is in way over his head and realising the nature of his predicament, he must use instincts he never knew he had in order to endure the ordeal he is about to be put through: an ordeal that will push him to the limits of endurance. This gives the film momentum, as after about a good 50 minutes to an hour of build up, proceedings erupt into chaos.

Bringing the chaos is Myun: a character who may look slobbish and as if he is playing at being gangster but is actually a man of infinite resource and who has an almost superhero like ability to take out rooms full of gangsters with nothing but a hatchet or in once virtuoso moment, some kind of huge animal bone (!). Yun-Seok plays Myun to the tilt and he makes for an impressive adversary and while he is certainly memorable the film belongs to Jeong-Woo as the continually beat up, pursued and just plain shit-out-of-luck Gu-nam. The actor is simply awesome making us sympathise with Gu-nam at all times despite his decisions not always being the right ones and hoping he will, eventually, outrun the escalating madness and violence that is pursuing him.

Seemingly shot on location, ‘The Yellow Sea’ has grit to spare and the director trawls the viewer through the dark, dank and dirty side of Seoul with no dingy apartment, cramped ship hull, seedy alleyway or grungy basement left unturned. The film also wisely builds to the eruption of non-stop violence and chasing and once it does, Na Hong-jin paces the set-pieces well: whether it’s Gu-nam’s incredible run through the bowels of a ship while fending off a horde of metal pipe and axe wielding bad guys, flipping an entire truck after smashing it through some large gates and numerous parked cars or the aforementioned Myun-takes-on-everyone-and-lives fight. The violence is certainly harsh and bloody but Na Hong-jin never lingers on it and effectively uses sound to give the scenes their queasy edge rather than sustained close ups of all the gore. Unfortunately, he can’t quite get away from overdoing the shaky cam and close cut editing which mars some of the action, not least an epic car chase, involving many dangerous car stunts, that is cut so close it is often hard to decipher what is going. Shame.

With it’s epic running time and surfeit of characters, concentration is a must and while this is a well made piece of cinema there a few inconsistencies here and there including our protagonist recovering from a gun shot wound a little too easily and keys always conveniently left in vehicles so a truck escape or car chase can commence (mind you, convenience has always been the luxury of cinema). There is a thread of black humour running throughout meaning it’s not as bludgeoningly nihilistic in tone as say ‘I Saw The Devil’ but ‘The Yellow Sea’ is certainly not a happy film either. Engaging, relentless and fierce with action, it is a film that shows ‘The Chaser’ wasn’t a one off for Na Hong-jin. Oh, and even though it’s well over two hours long make sure you stick through the credits.