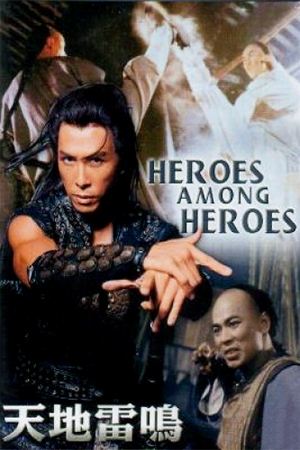 1978’s ‘Drunken Master’ saw director Yuen Woo Ping look at Chinese folk hero Wong Fei Hung in a comic light and break conventions as he did so. It also gave another figure from Chinese history a chance to share the spotlight: Sam The Seed AKA Beggar So. Following his critically lauded ‘Iron Monkey’, Yuen Woo Ping gave Beggar So another cinematic outing in the new-wave martial arts hit ‘Heroes Among Heroes’ – a film that once again paired him with the multi-talented Donnie Yen.

The film traces the possible early life of Beggar So who, in the beginning, is actually the son of an affluent father and a far cry from what he later became. So is a well-respected member of the town community who has a mutual respect for fellow inhabitant Wong Fei Hung and lives life in a care-free manner. With the deadly drug opium pouring into the town thanks to the corrupt foreign powers, the two righteous heroes find themselves fighting against the insidious evil around them, little realising who the real villains are. The main supplier to the town is a Manchu prince who enjoys a good reputation while secretly reaping the profits from his lucrative trade. This prince decides that the only thing standing away from further riches is the meddling of So and Wong Fei Hung; he therefore seeks an opportunity to turn one against the other and then take advantage of the situation. A misunderstanding between the two gives the prince the chance to use So – the younger and more hot-headed of the two – to get rid of resistance forever. The prince and his associates then get So hooked on the opium that is in their control and use him as a zombie-like puppet for their wicked plans. One such plan involves an assassination attempt by the helpless slave who is thankfully foiled by the slightly superior fighting skills of Wong Fei Hung and taken to a Korean herbal specialist to cure his addiction. After beating the drug-craving, So turns to drink and learns Drunken Boxing from an old beggar who frequents the town – breaking the strict rules of his father on drinking. Now turned from the smartly dressed son of one of the town’s officials to a beggar, So decides to use all of his newly-discovered abilities to take revenge on the drug dealers that once controlled him. Therefore in the film’s blistering climax, Beggar So and Wong Fei Hung stand against the Manchu prince and his countless warriors in a battle for final justice.

Although not quite reaching the heights of ‘Iron Monkey’, ‘Heroes Among Heroes’ is still a memorable new-wave action film that is packed with superior fight action. Donnie Yen is in first class form as Beggar So both in terms of acting and physical excellence; it’s unfortunate that Yen’s career took a serious dive shortly after this film and it is hoped that he can return to such classy productions in the not-too-distant future. Yuen Woo Ping fills the film with deftly-performed action that, while using wires to a strong degree, still allows the natural talents of the main cast to shine through. Where the film falls down though is the tiresome comedy that takes up a large part of the opening hour and is neither funny nor furthers the plot along. ‘Iron Monkey’ is an example of how Yuen Woo Ping kept the humour to a subtle minimum and concentrated on the characters, creating a widely loved cult classic. Had ‘Heroes Among Heroes’ used a similar template it might have jumped from being a very enjoyable film to a definite recommendation. As it is though, the film is at times wearisome and at times wonderful – endure the former and you’ll be treated by the latter. Scrapes into four stars, but dips into three on a number of occasions.