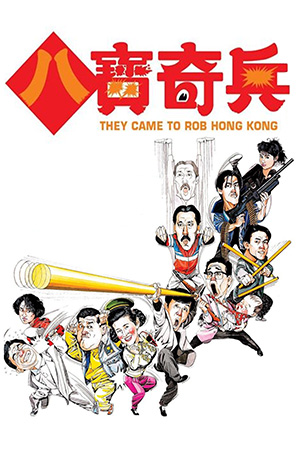 It was nostalgia. That must have been why I had the urge to put on this particularly disjointed Clarence Fok mess the other day; not nostalgia for Clarence Fok’s films, but for the Golden Age of Hong Kong cinema. Perhaps it was my way of honouring the recently deceased Dean Shek. Whatever the reason, I settled down with a cup of tea (how very rock-n-roll) and said of this production, ‘Entertain Me’.

Mainland robber Mao (Cheung) finds the law closing in on him, so much so that he loses his gang and girlfriend to the police. Mao decides that the only way to proceed is to execute a daring plan that involves sneaking into Hong Kong and robbing it before escaping back over the border. With this in mind, Mao and his remaining associate put together a team of unusual misfits who include disgraced policeman Sherlock False (Shek), conman Ken (Tsang) and Leslie Cheung impersonator, er, ‘Leslie Cheung’ (Liu Wai-Hung). Little do the gang know that Mao is setting them up for a fall though.

If you find the humour in the Lucky Stars films a bit too sophisticated, you’re in luck; ‘They Came To Rob Hong Kong’ makes ‘My Lucky Stars’ look like PG Wodehouse. Yet, while there’s a charm to the Lucky Stars films that combines well with action, Clarence Fok’s effort here is just tiresome. Like so many of Fok’s films, ‘They Came To Rob Hong Kong’s humour is low-brow, and not in a way that is at all endearing. When you’ve got Dean Shek, Sandra Ng and Eric Tsang all screeching for ninety minutes, you know it’s going to be a tough experience.

One thing that you can say about ‘They Came To Rob Hong Kong’ is that it starts and, to a lesser extent, ends with a bang. An extended action sequence featuring some solid Philip Kwok choreography begins the story and the hopes are high that this level with continue. Kwok must have then gone into hibernation as nothing even remotely deserving of his services is required until the 80th minute. And that is a long wait, as it turns out. Even if you are used to the wildly divergent genres and tones in Hong Kong cinema – for me, it’s often part of the charm – this is a bit of a slog. Nostalgia means that I enjoyed seeing these familiar faces – some of whom are now deceased – in the heyday – but next time I’ll try and find something a little less stupefying.