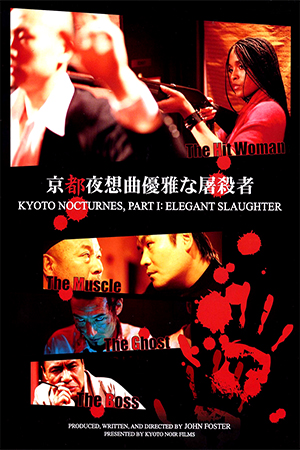 Darkly comic, stylishly violent and twenty minutes long, the first instalment of John Foster’s ‘Kyoto Nocturnes’ series has made him a director to watch.  And, as effective as this ghostly tale of yakuza madness and murder is, the truly mouth-watering news is ‘Kyoto Nocturnes, Part 1: Elegant Slaughter’ marks the first of a proposed five part series.

In the geisha district of Kyoto, Japan’s ancient capital, a yakuza war rages between the Watanabe and Aihara gangs.  Boss Aihara’s (Takami) latest hit on the Watanabe gang has left Watanabe’s army crippled, and Boss Watanabe (Tsumagata) and his loyal lieutenant Uchida (Inoue) seek refuge in a seedy bar, awaiting the final assault.  In desperation, Uchida hires the services of a cocksure African-American hitwoman, K (Moore), to swing the balance of power back in their favour, but Boss Watanabe’s nightmarish visions of his slain yakuza soldiers suggest he has already lost the war.  And what is the Consortium, a shadowy group who may or may not be pulling the strings?

A loaded Beretta of short film, ‘Elegant Slaughter’ begins the ‘Kyoto Nocturnes’ series with a bold and bloody bang.  Dropping the audience into the middle of a yakuza conflict, the smart script deftly fills in the back-story, while the tension wracks up as Aihara’s army draws closer.

Made on location in Japan with a limited budget, Foster uses the bar as the principal location, but dynamic compositions coupled with Akihiro Matsuura’s infernal red photography avoid a bland staginess.  Tsumagata gives a committed, exaggerated performance as the tortured Watanabe, while Inoue’s loyal yet conflicted Uchida is straight out of the yakuza movie tradition.  Foster wears his influences as a badge of honour, so consider ‘Elegant Slaughter’ as ‘Graveyard of Honour’ meets ‘Night of the Living Dead’, guest-starring ‘Kill Bill’s Vernita Green, and then get excited.

Despite a short film budget, ‘Elegant Slaughter’ boasts two effective action sequences.  A galvanising opening plays the sound of the Watanabe gang’s slaughter over a black screen, while a climactic assassination, with K garbed in a geisha gown dispatching gangster goons, makes audacious use of rapid editing and freeze frames.  Watanabe’s confrontations with the grisly apparitions of his fallen cohorts are also successful nods to horror cinema, invoking the work of Romero and Raimi.

A rewarding stand-alone experience, ‘Elegant Slaughter’ is also an irresistible taster for stories yet to come.  The queue starts here.