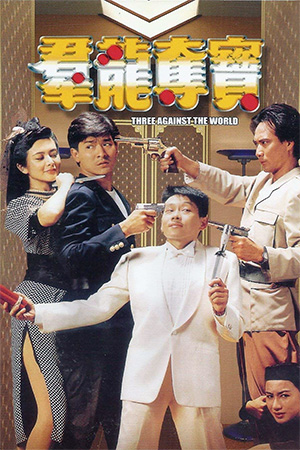 Well respected detective Charlie Chan (Andy Lau) is given the task of guarding a priceless copy of the Koran which is being exhibited at a local museum. Naturally there are numerous other parties who have also fixed their eye on the artefact: firstly there’s Ma Ju-Lung (Keung) who is a first-rate fighter and keen gunman; there’s also Cho Mei Fan (Robin), a top thief whose reputation precedes him. These two use their various means to get the Koran while Chan has to be one step ahead of them to protect it. Things are further complicated when Cho’s beautiful daughter (Kwan) takes a shine to Chan and is torn between her love for the brave detective and her loyalty to her father. All is resolved as the three parties must firstly join forces, then engage in one final stand-off to see who will get the much-wanted Koran.

Andy Lau’s cinematic boom period (late 80’s-early 90’s) saw the actor/singer star in literally scores of movies. Many of these parts followed the usual ‘rebel without a clue’ stereotype that he had played to death by the late 80’s, but ‘Three Against The World’ allows Lau to try a different role and in a different setting. This, however, works superbly and Lau is allowed to try his fighting skills (albeit minimal) against kung-fu veteran Tsui Siu Keung and co-star with the lovely Rosamund Kwan; both aspects give this film a real lift. The period detail is well-realised as is the pace of this production which draws the viewer in and gives them a very entertaining 90 minutes. The action – especially the three way battles – is excellent and is mixed in very well with the comedic content to form a fine film.