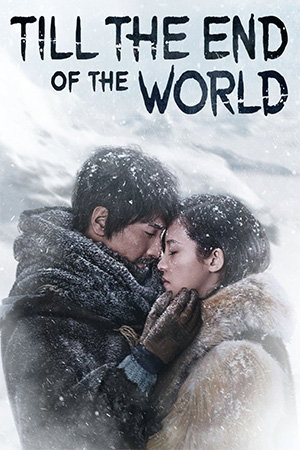 Self-centred young millionaire Wu Fuchun flies to Antarctica, hoping to explore the landscape for a future business investment. Alongside him – and diametrically opposed to him – is conservationist Jing who has joined the expedition to make sure venal Wu Fuchun doesn’t jeopardise the environment. A turbulent snow storm causes the plane to crash though and the pilot is instantly killed in the disaster. While Wu comes away relatively unscathed, Jing is incapacitated by a broken leg and now relies on this unlikely source as a means of survival. Eventually, the pair find an abandoned hut previously used as a base camp for European scientists and each day Wu explores the surrounding area for any hope of finding civilisation. Yet the harsh environment has only just begun to take it’s toll on Wu and Jing and, forced to be in each other’s company for days on end, the pair grow closely together through necessity.

Wu Youyin brings his hit novel to the big screen and pairs two performers who had previously stirred the collective hearts of the nations with drama ‘So Young’. The result is cliched and predictable, but executed with such panache that it sweeps you along with the drama. It occasionally overdoes the schmaltz yet pulls through these moments with a kinetic energy that’s hard to ignore.

‘Till the End of the World’ starts confidently. With minimal introduction to the main pairing, the story brings the terrifying crash into play within just a few minutes; it isn’t quite the white-knuckle ride that you get from a big-budget Hollywood film, but it certainly delivers a shock to the system. From here on the story becomes a fight for survival juxtaposed with the usual Asian rom-com trappings; remarkably enough, the combination is just about right and both ideas support each other quite well. The stark, unforgiving landscape of Antarctica is one of the strongest areas of the production, grim, realistic and believable. The natural wonder of the environment is superbly used, by turns beautiful and then hopeless.

There have been some exceptional films about survival in the most inhospitable places; Kurosawa’s ‘Dersu Urzala’ immediately comes to mind, as does Kon Ichikawa’s ‘Alone Across the Pacific’ and, to a lesser extent, the surprisingly effective Liam Neeson thriller ‘The Grey’. The best stories never let the harsh landscape become the only distraction – it’s easy to rely on stunning visuals and forget the importance of the human drama. ‘Till the End of the World’ gets the balance just right, switching between some tense moments of survival and a very natural development of the characters. There’s no surprise in the burgeoning relationship of the two leads, but it is allowed to grow organically and the natural chemistry between Zhao and Zishan makes the tender moments completely believable.

While ‘Till the End of the World’ allows sentiment to become a little too exaggerated as the film nears its end (the friendly penguin is cute but entirely unnecessary) it is, nevertheless, a mixture of the alienating and the intimate that works. A quality romantic drama for those after something a little different.