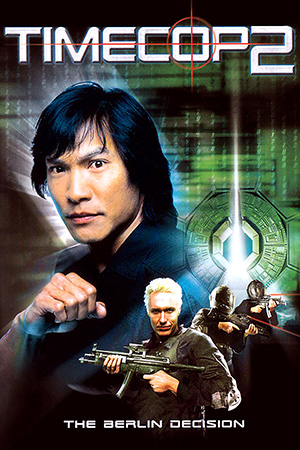 Set twenty years after the original film, the Time Enforcement Commission (TEC) agency is still working hard to ensure that no one is abusing the capabilities of time travel for their own benefits.  However, they didn’t envisage that the danger could come from within and problems arise when agent Brandon Miller (Ian Griffith) decides that the best use of his power would be to correct the mistakes made throughout history.  Therefore he decides to travel back and wipe out Hitler but is stopped and imprisoned by top agent Ryan Chan (Scott Lee).  Two years later though, Miller escapes from prison with a new objective – wipe out the members of the TEC agency so there is no one left to stand in the way of his devious plans.  With time fast running out, its up to Ryan Chan to travel back and try and stop Miller at various intervals in history before he is able to kill off all of the TEC and change the future as we know it.

While the first ‘Timecop’ was admittedly no masterpiece, it was still a fun little 90’s Sci-Fi actioner that benefited greatly from the presence of Van Damme. Being a time travel movie, it also featured a premise that was ripe for additional exploration so it’s no surprise that a sequel eventually emerged. Unfortunately though, ‘Timecop 2’ really fails to capitalise on the original concept as it features a story that is bogged down by silly plotholes, bizarre inconsistencies and predictable clichés. It also has to be said that the production feels a lot more low budget, with no real effort putting into fleshing out the characters and the majority of situations always feeling like they were ripped right out of bigger, better movies.

If you’re a fan of b-movies however, there is still a chance that you’ll find something to appreciate in ‘Timecop 2’. Jason Scott Lee, best known for his role in ‘Dragon: The Bruce Lee Story’, certainly makes for a believable and likeable action hero, and he is more than capable of displaying the two emotions that are required of his character. Likewise, Thomas Ian Griffith portrays a fairly credible, if somewhat hammy bad guy and is amusing for his dreadful ‘Matrix’ inspired attire alone. As for the action, it’s fairly bland but adequate for a straight-to-DVD action flick, with a heavy reliance on simple one-two punch combinations.

If viewed with low expectations or caught randomly on late night TV, ‘Timecop 2: The Berlin Decision’ might make for a minor distraction.  As a sequel though, it’s a definite disappointment that feels like a waste of a fairly fun concept.